Several days after student government leaders voted to remove an official for privately stating his Catholic beliefs, they voted to retain the replacement amid accusations that he had made anti-Semitic comments on social media.

Now Jack Denton is appealing the Florida State University Student Senate’s decision to remove him as president, with the legal help of the Alliance Defending Freedom.

An anonymous Change.org petition against Denton’s successor, Ahmad Daraldik, demands his resignation for social media posts including “Fuck Israel” and “stupid jew.” It says he also “compares the Israeli government to Nazi Germany’s genocide on the jews [sic].”

The petition had just over 8,500 signatures as of Thursday night. An update last week asks supporters to pressure the student government to vote again on removing Daraldik: “FSU should not have an antisemitic senate president.” The Senate has not announced any plans to re-vote on the Senate president position.

The vote of no confidence to remove Daraldik, who is a member of FSU’s Students for Justice in Palestine chapter, required a two-thirds supermajority. The College Fix obtained a tally that showed each senator’s vote in the 19-16-6 vote (second column from the right), the last number of which were abstentions. (Another 13 senators were not present for that specific vote.) 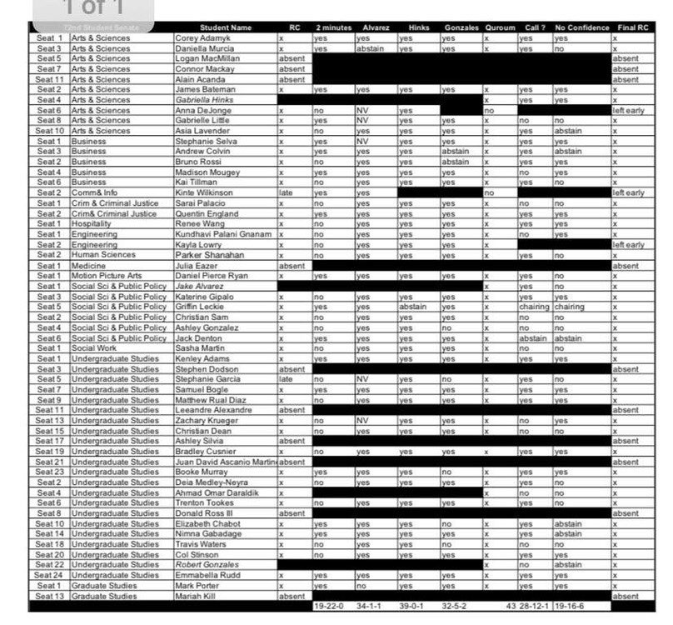 Neither FSU media relations nor Student Affairs, which oversees the Student Government Association, responded to a Fix query Monday about why they have not intervened in a situation that could get the university sued for viewpoint discrimination, based on the disparate treatment of Denton and Daraldik.

The student government also did not respond to a query about the likelihood it could get sued, and why it’s confident that its different treatment of each official is constitutional.

The Foundation for Individual Rights in Education told The Fix the administration should not intervene, however.

“Because the student government leaders act as their representatives, students should decide who will represent them, not administrations,” Adam Steinbaugh, director of FIRE’s Individual Rights Defense Program, wrote in an email. “That means that student governments may promote or remove leaders based on their personal or political views.”

‘He said, I just want you to be aware of what Catholic teaching is on this’

Denton was a member of the Catholic Student Union and participant in its private group chat. In response to a posted list of organizations to financially support, he criticized Black Lives Matter, the ACLU and Reclaim the Block as organizations that “advocate for things that are explicitly anti-Catholic.”

Those causes are “transgenderism,” legal challenges to anti-abortion laws, and cuts to police budgets, which is “contrary to the Church’s teaching on the common good,” Denton said, according to screenshots leaked to a student senator, Khundavi Gnanam.

Denton appealed the decision to remove him to the SGA’s Supreme Court on June 18, according to Tyson Langhofer, director of the Center for Academic Freedom at the Alliance Defending Freedom. That’s the same day as the failed vote to remove Daraldik.

Langhofer told the Daily Caller News Foundation that the alliance was advising Denton on his options “to challenge any unconstitutional or improper application of these student policies,” implying that his removal violated his religious freedom.

“He didn’t even say to the others [in the group chat] that you have to do this,” Langhofer said, referring to Denton’s warning about the three organizations’ advocacy. “He said, I just want you to be aware of what Catholic teaching is on this.”

Denton told the nonprofit news organization that senators who voted against his removal the first time, on June 3, were themselves threatened with removal from office if they didn’t reverse their votes at an “emergency meeting” June 5. That meeting lasted about six hours, most of which was students “spewing hate and telling me how terrible of a person” he is.

It was not long before Daraldik came under fire as well for his social media posts, one of which is from his middle school days. The petition for his removal says it was posted two weeks ago, and it refers to Denton’s removal for “transphobic remarks.”

Jewish News Syndicate pointed to a 2013 Facebook post by Daraldik, who called himself “Ahmad Eldeek,” that allegedly depicted an Israeli soldier stepping on a Palestinian child: “stupid jew thinks he is cool.”

BDS Report, which opposes the anti-Israel boycott, divestment and sanctions movement, tweeted that the photo Daraldik posted was staged, and that the soldier was neither Jewish nor Israeli.

JNS also cited a website with Daraldik’s name on it, removed after The Fix visited it Wednesday, that compared the Israeli government’s behavior towards Palestinians to Nazi Germany’s genocide of the Jews. The banner on it reads: “The Holocaust never ended, it just moved to Palestine…”

In a recent video cited by Campus Reform, Daraldik reportedly defended his statements about Israel. He mentioned a trip he took to the disputed territories in August 2019, citing a bad experience at an Israeli checkpoint: “I was dehumanized, I was humiliated, and I was upset … What would you have done if you were in that situation?”

FSU Senate President Ahmad Eldeek Daraldik made a post attacking Jews, but the part he didn’t include was that the photo was staged. The person in the pictures neither Jewish or Israeli. #Paliwood @ahmaddaraldik @FSU_SGA_Senate pic.twitter.com/sMdq9zs4f1

The SJP chapter at FSU, to which Daraldik belongs, blasted the campaign to remove him as “racially and politically motivated to smear and silence Palestinian students and critics of the state of Israel.” He was simply using his “First Amendment rights to condemn any oppressive nation-state.”

Daraldik’s attempt to do damage control is backfiring with others, however. FSU student Becca Saukaur told FSUNews.com, owned by the Gannett newspaper chain, that Daraldik’s video “is deflecting the blame by highlighting his people’s oppression instead of actually taking responsibility.”

Daraldik himself admitted the Israeli soldier photo he posted “could potentially be staged,” but told FSUNews.com he was “12 years old and it was hard to differentiate what was real and was not real because there was so much happening.”

He lived in Palestine at the time “and I couldn’t differentiate between a Jew, a Zionist and an [Israeli Defense Forces] soldier because of the [military] occupation.” His post was “not directed to the Jewish community as a whole or at FSU.”

A fellow Palestinian student, Alexa Senan, distinguished Daraldik’s comments from Denton’s in an interview. “Some students are upset with Denton’s removal and are trying to compare the two incidents to each other but Denton’s [statement] was from pure bigotry and Ahmad was speaking from experience and pain,” she told FSUNews.com.

The university’s Office of Admissions tweeted back at someone who cited Daraldik’s posts, according to FSUNews.com. (The start of the tweet thread is no longer visible.)

“Please be assured that Florida State University does not tolerate racism or hate speech,” the office wrote June 12. “We take matters like this very seriously, and will review this information with our Office of Student Conduct and Community Standards.”

University administrators “are free to criticize the wisdom or propriety” of student government decisions, FIRE’s Steinbaugh told The Fix.