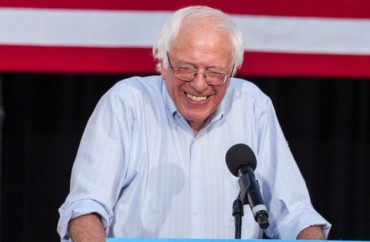 Michael Murphy wanted to bring national political figures to the University of Florida. The student body president reached out to staff for Bernie Sanders, seeking a non-campaign speech.

The septuagenarian senator’s presidential campaign staff suggested a campaign speech, and Murphy declined. His non-campaign staff said he was “traveling extensively” and couldn’t make it in his capacity as a senator. (Campus newspaper The Alligator verified Sanders’ staff declined the invitation Sept. 22.)

Murphy also wanted to bring Donald Trump Jr., who is more of a movement conservative than his president father. He met Caroline Wren, national finance consultant for President Trump’s re-election campaign, at a “social event,” and they later discussed bringing Trump Jr. to campus for a “non-campaign event.”

She connected him with the younger Trump’s booking agent, and the event was scheduled. Trump Jr. and his girlfriend, former Fox News host Kimberly Guilfoyle, received $50,000 as a joint payment from student activity fees for their Oct. 10 event.

The politically asymmetric appearance may cost Murphy his position as student body president.

The Alligator reports he was served an impeachment resolution Tuesday for “malfeasance and abuse of power,” which said he “colluded” with Wren to bring Trump Jr. to “further enrich” Trump Jr. and “advance his own expressed political beliefs.”

It was signed by 107 others, according to the paper, “affiliated with Inspire, Gator Party, people not involved in [student government], UF alumni and students who used to be affiliated with Impact, the former majority party.”

Among the 107 who signed the resolution are people affiliated with Inspire, Gator Party, people not involved in SG, UF alumni and students who used to be affiliated with Impact, the former majority party.https://t.co/yXRjIILrDd

The resolution ramps up the pressure on Murphy, some of whose colleagues demanded he resign at the prior week’s senate meeting in response to public records of his communications with Wren obtained by The Alligator. (An alumna first requested them and passed them to the paper.)

The technical argument for impeachment is that the payment to Trump Jr. and Guilfoyle violated student government rules that ban expenditures “in support of or against a political party at any level.” In her email communications with Murphy, Wren used her “private email in my personal capacity and mistakenly forgot to remove my Trump Victory signature,” she told The Alligator last month.

Trump Victory is the name of the president’s re-election campaign, creating the impression that Trump Jr.’s paid visit was a Republican campaign event – the kind that Murphy rejected from the Sanders campaign.

But the technical grounds for impeachment were not alone in last week’s senate meeting, according to the newspaper:

Stephanie Beltran, who was affiliated with Impact Party in the past, also spoke out against Murphy’s actions, and said he wasn’t leading with the students’ interests in mind.

“Michael intended to use his position to bring Donald Trump Jr. to campus, but didn’t consider the impact on the students,” Beltran said. “We must hold people accountable when certain boundaries are overstepped.”

Jasmin Du Bois, a UF political science junior, listed other ways in which $50,000 could be used: 1,219 people could receive flu vaccines, 56 students’ healthcare plans could be covered or 9,969 hungry children in Alachua County could be fed.

But a former staffer for the student government’s ACCENT Speakers Bureau, which facilitated the appearance, defended Murphy from “partisan hits” through the meeting. Jared Rossi said the bureau “brings speakers from both sides of the aisle.”

Bureau head Henry Fair also told The Washington Post last month that the Trump Jr./Guilfoyle appearance was “a campus speaking engagement, not a campaign event.” The duo praised the president’s economic stewardship and leadership in general while also “taunting” some liberal protesters, the paper said.

The paid visit by the president’s son, an active campaigner for his re-election, falls in a gray area for campaign finance laws, a former legal counsel for the Federal Election Commission told the Tampa Bay Times.

Adav Noti, senior director of the Campaign Legal Center, said “the line between campaigning and sort of promoting an agenda is not always crystal clear.” But he added that “Campaign officials shouldn’t be giving paid speeches to charitable organizations,” including publicly funded student governments.

One of the protest leaders outside last month’s event, Emily Hyden, told the newspaper she’s looking for a lawyer who can help get back student activity fees paid to Trump Jr. and Guilfoyle.