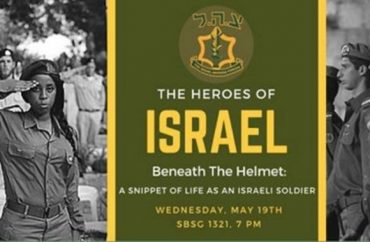 A pro-Israel movie screening at UC Irvine on Wednesday night prompted a massive protest by Students for Justice in Palestine, who blocked the exit paths, chanted “Long live the intifada,” and prompted attendees to fear for their safety and call campus police for assistance.

The event included a screening of “Beneath The Helmet,” a documentary about members of the Israel Defense Forces, as well as a panel session with Israelis who served. It was hosted by Students Supporting Israel at UCI as part of a weeklong series of Peace Week events.

But the disruptive protest at the screening was touted by Students for Justice in Palestine at UC Irvine as a victory.

And on Facebook, the group posted: “Today we successfully demonstrated against the presence of IDF soldiers on campus. We condemn the Israeli ‘Defense” Forces, better defined as Israeli Occupation Forces, because they enforce Zionist settler colonialism and military occupation of Palestinian land by the Israeli nation-state. The presence of IDF and police threatened our coalition of Arab, black, undocumented, trans, and the greater activist community.”

Roughly 50 protesters took park in the demonstration, reports the Orange County Register, which added students shouted “Long live the intifada” and other “profanity-laced chants” as they crowded the venue — and ultimately campus police had to escort Jewish students away from the scene.

Students Supporting Israel at UCI also posted on Facebook that protesters “were in violation of UC Regents Hate Speech policy and were shouting various anti-Semitic statements.”

“While it saddens us that there exist individuals who are more interested in shutting our Peace Week down, we at SSI want to assure you all that we are not backing down in the slightest. We are not going to give in to their intimidation tactics and anti-Semitic rhetoric,” they added.

The rowdy and aggressive demonstration prompted Chancellor Howard Gillman to email the campus community on Thursday condemning the protest.

In his email, a copy of which was obtained by The College Fix, Gillman notes the demonstration “crossed the line of civility.”

“A group of protesters reportedly disrupted the event, blocking exit paths. Participants feared for their safety, calling on our police force for assistance,” Gillman continued. “While this university will protect freedom of speech, that right is not absolute. As I mentioned in a campus message at the beginning of the academic year (freespeech.uci.edu), threats, harassment, incitement and defamatory speech are not protected. We must shelter everyone’s right to speak freely – without fear or intimidation – and allow events to proceed without disruption and potential danger.”

The chancellor added campus officials are analyzing all reports and information regarding the incident to determine whether disciplinary or legal actions are appropriate.

“Please respect your colleagues’ right to recognize their heritage and express opinions in a safe environment,” Gillman concluded.

The incident comes just a few months after the Board of Regents recently adopted a statement of principles against intolerance due to repeated incidents of anti-Semitism that have plagued the system.