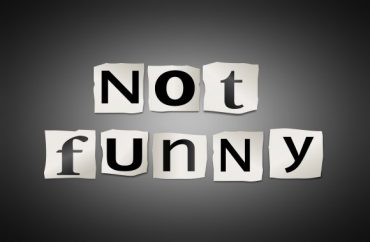 A Missouri high school student who, as a senior prank, put his school “up for sale” on Craigslist has been suspended and banned from participating in graduation ceremonies.

“It was Scheele’s choice of words that got the A-student in trouble,” The Kansas City Star reports. “In addition to including several amenities, such as a new football field and what he called a ’20+ room facility, his post also said, ‘The reason for the sale is due to the loss of students coming up.'”

That “loss of students” is what set off alarm bells. Before an investigation showed there was no actual threat, worried parents had pulled their kids out of school. The district never sent out notification of any possible danger.

“Out of an abundance of caution, administrators and police investigated and determined there was not a credible threat,” the district said in a statement. “A student who makes a real or implied threat, whether it is deemed credible or not, will face discipline.”

“I posted a harmless ad on Craigslist with no talk of violence at all, and because someone twisted my words and inferred that I might do something to the school, they won’t let me walk at graduation,” Scheele said.

“Everyone I know knew it was a joke. All the seniors knew that it was clearly a joke.” …

Scheele’s mother, Denetra Clark, said, “I think the school district drastically blew this out of proportion. … I think it was a silly prank. He probably didn’t choose the best words, but he’s an 18-year-old boy.”

And once he found out some people viewed the post as a threat, “he felt remorse,” said Clark, a freelance photographer in Independence. “He didn’t want to scare his classmates. He wanted to leave a lasting memory.”

After investigating the Craiglist post, Independence police said they found no reason to pursue criminal charges.

Scheele made the post [last] Friday. It has since been removed. On Tuesday, Independence detectives showed up at his house.

“They said they didn’t find it to be a credible threat,” Scheele said. “They chuckled about it and told me I should probably go and clear it up with the school.”

Scheele said he went to school the next day to explain and apologize. He was suspended for three days — the rest of the seniors’ school year — and told he could not participate in graduation [today].

Schools are officially zero-tolerance zones for humor. You investigate, you find out it's all a big ha-ha-ha misunderstanding. How is that a good use of suspension authority? https://t.co/T7nTyExrUZ

Scheele said he was OK with the suspension but wished he could have walked at graduation. He carried a final GPA of 3.96 and had never previously been disciplined at school.

He said he would pull the prank again, but noted “I would use a better choice of words to make it blatantly obvious that it was a joke. Or I would just write at the end of it: ‘This is a joke.'”