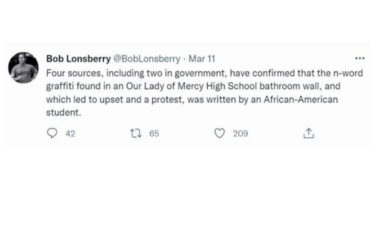 A student who wrote racist graffiti at a private Catholic school in New York is reportedly black.

Bob Lonsberry, a radio talk show host from the area, said he quadruple confirmed it.

“Four sources, including two in government, have confirmed that the n-word graffiti found in an Our Lady of Mercy High School bathroom wall, and which led to upset and a protest, was written by an African-American student,” he tweeted March 11.

Four sources, including two in government, have confirmed that the n-word graffiti found in an Our Lady of Mercy High School bathroom wall, and which led to upset and a protest, was written by an African-American student.

Our Lady of Mercy is a Catholic school for girls in grades 6 through 12.

The student’s anonymity is being protected because she’s a minor, reports The Daily Wire, which added that the vandalism had read: “This school is filled with a bunch of [N-word]. Get out or else!”

Before the school had determined the culprit, the incident had incited protests and calls of “Black Lives Matter.” 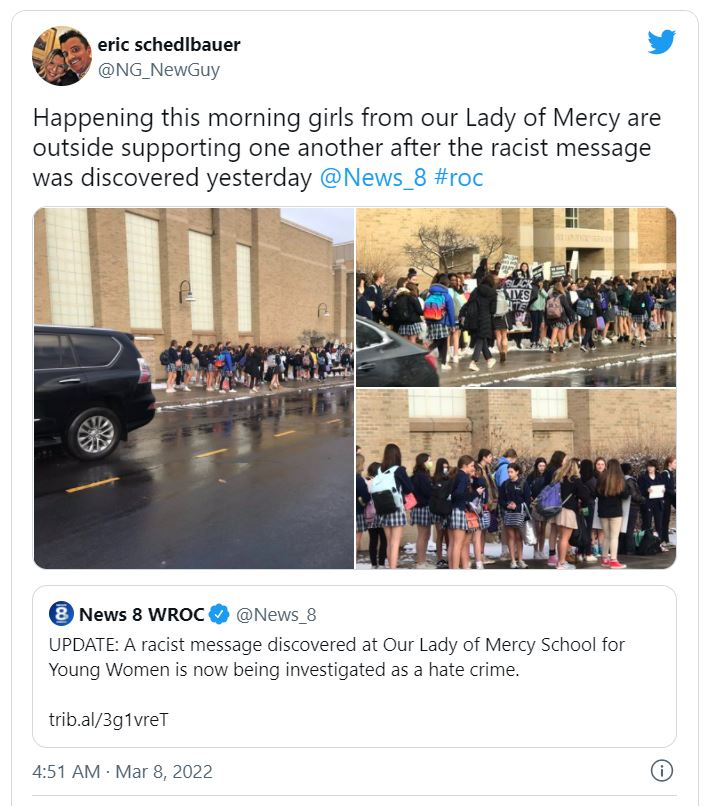 Rochester First reports that in a statement to the campus community, school officials said “appropriate and maximum disciplinary action has been taken” against the student who committed the act.

“Even though closure has come to this single incident, there is so much more work to do to understand what people are feeling and fearing. Our students and our community are distressed and hurt; Mercy will work to help heal the wounds caused by this incident, as well as help heal deep-rooted, related feelings this incident has brought to the surface. Consistent with the Critical Concerns of the Sisters of Mercy, we are planning events and initiatives in the coming weeks to recognize and acknowledge the powerful emotions that are present within our community. We are a compassionate institution, built on a foundation of faith, hope, and love and made strong by the resilience of our students, families, faculty, staff, and everyone within the Circle of Mercy. The road ahead will not be easy, but our love for each other and our school will light the way.“