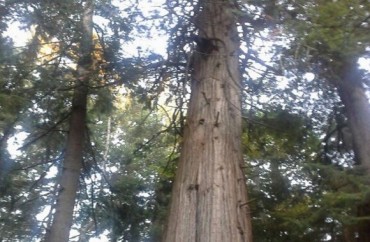 Israel is reportedly “one of a few countries in the world that entered the 21st century with a net gain in its number of trees,” according to a group that has pledged to turn the desert-nation into a garden oasis and says it has planted 250 million trees in the region since 1901.

While environmentalists might be encouraged by the efforts of the Jewish National Fund, a group of Ivy League students — including members of Students for Justice in Palestine and the United Minorities Council — say they see it as ecological imperialism.

As part of a recent “Divestfest” protest at the University of Pennsylvania, students eco-demonstrators bemoaned the tree-planting effort, according to a report in The Statesman:

…the presenters looked into the symbolism of “making the desert bloom,” a phrase the students argued connected the forest environment to whiteness, evoked the notion of “a vacuum that the European savior can come nourish,” and ultimately incentivized “artificially making these areas look more like Europe.”

The students found a particular problem in the planting of pine trees in Israel and the West Bank, drawing a “connection between pine trees, forestation, and the way they further the colonialist agenda through capitalistic (sic) means of timber production.”

While pine trees are an invasive species and can be bad for certain environments, the solution is not merely to plant native trees like the olive tree.

“If we are talking about environmental justice, we have to consider intersectionality,” one of the presenters said. “We have to consider the way that different environmental agendas are being used in order to romanticize and support things that may be in violation of human rights and ancestry rights.” Additionally, the students urged the audience to “look for the complexity in the way that issues are whitewashed.”