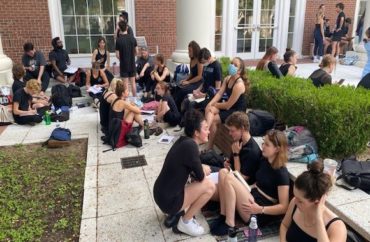 Theater students at Coastal Carolina University bagged classes earlier this week due to what they believed was a racially exclusionary list on a chalkboard.

According to The College Post, CCU Artist-in-Residence Susan Finque had met with two black students after a class to discuss their “frustration and isolation.” One of the students, Finque said, began writing the names of the class’s non-white students on the board.

Finque’s mistake: Not erasing the names after the meeting ended. For when students saw the list, they believed Finque was “singling out” the class’s black students.

Dressed in all black, students protested not only Finque, but another professor who had written in an email that the incident was no big deal … and that “people get their feelings hurt so easily.”

The protesters said Robert Earnest’s comments were “unacceptable” and demanded he be suspended. They also alleged racism has been “rampant” in the theater department for years.

Student Michelle Garcia said “Students don’t feel safe anymore and it’s not right,” according to WPDE. Student Kelis Herriot added “Until we are met with the same respect that we give our professors, we do not owe them that.”

Earnest responded to his comments to an email to ABC 15 News.

“I just sent a letter of apology to the [Diversity, Equity & Inclusion] committee. My comments were not directed at BIPOC students. Evidently, there was an issue of a list of students that was posted that caused some confusion,” he said.

“I then made an insensitive comment asking them to move on from it. I had no idea it would blow up like this.”

“The leadership of the University and of the Edwards College of Humanities and Fine Arts are aware of the complaints that some of our theatre students have communicated. We are working to establish the most appropriate path for resolving their concerns.”

WBTW reports Herriot said the protests will continue “from 9 am to 5 pm until the university and faculty made the necessary changes.” She added she hopes these actions will “motivate others to speak up against insensitivity.”

Earnest told the station that “The current climate of college campuses across the United States makes it very difficult. As a white man, any small thing you say can be expanded or out of context.”

MORE: Princeton U. theater to ‘prioritize’ fight against ‘systemic racism’