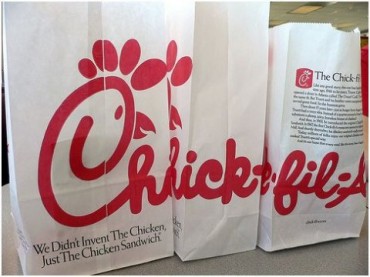 Back on May 1, two students at Bangor Area High School in Pennsylvania wore shirts with a “Chick-fil-A” logo on them during the school’s (televised) morning announcements.

However, this was on a day that the school’s Gay-Straight Alliance had designated for students to wear rainbow-colored shirts to show support for “Lesbian, Gay, Bisexual and Transgender issues.”

Outraged students took to Twitter — during school hours — to lambaste the Chick-fil-A-wearing duo. This led to quite a few suspensions … of those using the popular social media platform.

The tweets continued over the weekend, and on Monday students who tweeted at the boys wearing the shirts were called to the high school principal’s office.

Students were told they were being punished for tweeting during school hours, and because some of their tweets contained obscenities, [senior Erin] Snyder said.

She said about 15 students were suspended and others were given detention.

Snyder was one of the suspended students.

Superintendent Frank DeFelice and Tamara Gary, the high school principal, did not respond to phone calls for comment Thursday.

Jeff Vanderpool, 16, also was among the suspended students.

“I wouldn’t be upset if they did it on a different day, but it was a day to not discriminate against LGBT students, and that’s what they were trying to do,” he said.

Vanderpool tweeted, “Shout-out to the [expletive] in the Chik-fil-A shirts,” after seeing the two students on his homeroom’s television last Friday morning.

He was called to the high school principal’s office Monday and told his tweet was threatening and therefore he was being suspended.

The local ACLU called the suspensions “pretty harsh punishment” and is investigating whether the district reacted to actual profanity or pornographic lingo … or the (political) content of the tweets in question:

If officials objected to the content of the tweets sent during school because they contained explicitly profane or sexually graphic language, that’s within the school’s power, [ACLU Deputy Legal Director Mary Catherine] Roper said. If officials objected to the tweets because they were touching on sexual topics, that’s not OK because students were discussing a political issue.

Bangor Area HS’s actions in this whole affair appear to be a complete 180 from those of California’s Live Oak High School. There, school officials refused to allow students to wear shirts with an American flag on them because it was Cinco de Mayo … and Latino students might have been offended.

The US Supreme Court recently refused to hear an appeal by the flag-wearing students, allowing to stand Live Oak HS’s administrators’ decision.