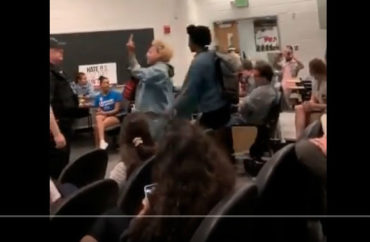 Some students at Towson University are really offended by that photo of a gleeful Sen. Lindsey Graham adjusting his tie as a protester screams behind him against Brett Kavanaugh’s Supreme Court nomination.

But like a semi-conscientious jaywalker, at least they made their interruption short and semi-sweet.

Protesters briefly disrupted a talk on “funny right-wing memes” by Benny Johnson, chief creative officer for Turning Point USA and former BuzzFeed editor. It was hosted by the Maryland public university’s TPUSA chapter, which had its first meeting earlier this month (Chick-Fil-A was served).

The event description reads: “How can YOU win the political MEME war. How to personally create & spread the dankest MEMES. WHY AMERICA IS THE GREATEST COUNTRY IN THE WORLD.”

In video tweeted by Johnson, he appears to be discussing the Graham photo, which was quickly memefied, when protesters stand up, begin chanting and slowly saunter out of the lecture hall.

I gave a speech tonight at Towson University.
The speech was about memes.
Funny right-wing memes.
That’s all.
Gues what?
The Left showed up & proved my point perfectly.
They screamed that I was “racist” & marched out – flipping off the cops & audience.
Begun, the Meme wars have. pic.twitter.com/fpH3HlGOVe

The chants are hard to make out – diction is not the protesters’ strength – but one sounds like “there must be some racists in the atmosphere” (?). One frizzy-haired student, the apparent ringleader, flips off the room and police officers as the group heads out. Another waves. Some of them look embarrassed to be there.

Just as Republican Rep. Billy Long drowned out a protester at a congressional hearing last year with his auctioneering skills, a banana-shirted student in the audience attempted to disrupt the disruptors by chanting “peanut butter and jelly!” in rapid succession. The other audience members laughed and applauded him, and it got a laugh out of Johnson.

In the end, the disruption lasted about 20 seconds. Johnson made as much of the incident as he could, saying the protesters “proved my point perfectly … Begun, the Meme wars have.”

Perhaps education reform groups can use this incident to design model legislation on discouraging the heckler’s veto: Limit your chants to 20 seconds and file out of the venue, and you won’t get punished.

Colleges should also designate a Disruption Disruptor Officer like the guy in the banana shirt.

MORE: Pro-Kavanaugh females not allowed to speak at campus forum