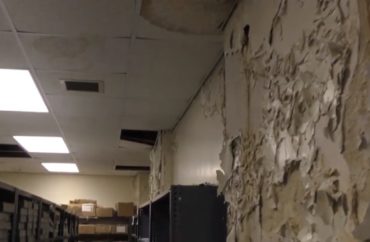 Collateral damage in tiff with teacher

Administrators at a Virginia high school couldn’t handle it when their students produced a news report that documented the crumbling building they were forced to inhabit during the school year.

The students appear to be collateral damage in the school district’s retaliation against a teacher who appeared in the Commodore News broadcast, given that a spokesperson said the student journalists “did nothing wrong.”

The Virginian-Pilot has the story of 109-year-old Maury High School in Norfolk, whose decrepit condition is no secret.

In fact, administrators took state lawmakers on a tour last fall to illustrate why they need more funding: Part of the auditorium ceiling collapsed and a classroom floor caved in “like a sinkhole.” Some rooms might as well be parked cars with windows rolled up in the summer, with teenagers locked in.

Recent graduate Douglas Deutsch and current student Jalen Rogers didn’t think they were “going to cause controversy” by “pointing out the obvious” in their final report of the year for their broadcast news class, Deutsch told the Pilot.

The obvious was made worse when a teacher, the student media advisor, appeared in the broadcast. Mark Rowe, also a Maury graduate, shared the history of the school and said the building was in worse shape than his house, which is even older:

The current condition is definitely poor. It’s an old building, but like everything else, it needs to be maintained, and some of the budget situations that have occurred in Norfolk Public Schools have made it such that they don’t have enough money to dedicate to renovating buildings or keeping them in good repair.

Student journalists wanted to highlight the conditions of their crumbling school building. Administrators ordered the video taken down: https://t.co/zluyqvMsUi

The district spokesperson told the Pilot that the removal of the video just days after its posting “involves a personnel matter,” namely that “commentary by the teacher … was not in line with NPS policy.” (Teachers aren’t allowed to publicly state the truth, apparently.)

The district is still evaluating “how to equitably address the issues of many of our aging school buildings,” the spokesperson said. Maury is the oldest continuously operating high school in the state.

A longtime executive director of the Student Press Law Center thinks the district violated its students’ rights, using the “personnel issue” as a pretext to remove the video.

Mark Goodman, who now teaches journalism at Kent State, told the Pilot that a “factually accurate story about a school building” does not qualify as an “educationally reasonable justification for censorship.” The district can’t rope in students to deal with a teacher who allegedly violated policy, he said.

The incident may have a silver lining, however. Not only did it trigger the Streisand Effect when a parent posted the removed video on YouTube, but it highlighted the need for student press protections in state law.

The only conditions for censoring student publications under Hurst’s bill, which died in subcommittee, would be libel, privacy violation, “clear and present danger” or “substantial disruption.”

Tellingly, lawmakers refused to act on Hurst’s bill after a student media advisor testified about losing her job for the same reason: “her students reported on school facility issues in their building,” the Pilot said.