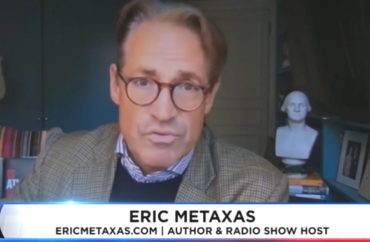 Hundreds of Sewanee faculty, students and alumni have signed on to a letter calling on campus leaders to revoke the honorary degree they gave to popular evangelical author and radio host Eric Metaxas in 2015.

More than 350 students, faculty and alumni of the University of the South, a private, Tennessee-based Episcopal liberal arts institution, have signed the letter-styled petition, arguing that the award should be revoked, citing the best-selling author’s comments regarding LGBTQ issues and the 2020 election results.

His latest book, “Is Atheism Dead?” is scheduled to be published this week.

As for the petition, it cites a 2015 column Metaxas wrote that the protestors argue advances a “dangerous trope by accusing LGBTQ people of ‘capturing the hearts and minds of young people’ through literature” and warning parents to “inoculate kids against unhealthy influences.”

The petition also cites Metaxas’ concerns that the results of the 2020 election are fraudulent and in particular a quote attributed to the conservative Christian pundit to President Donald Trump that “I’d be happy to die in this fight. This is a fight for everything. God is with us.”

The petition also alleges Metaxas is in league with conspiracy theorists and right-wing violent extremist groups.

“Mr. Metaxas should lose the privilege of holding an honorary degree from Sewanee because of his anti-democratic promotion of lies and falsehoods about the American electoral process and his support for the ensuing violence,” the letter states.

“Revocation of the degree will not reverse the harm Mr. Metaxas has inflicted, however, it will remove the imprimatur of Sewanee’s moral and intellectual leadership from his actions and demonstrate the seriousness of Sewanee’s commitment to reckoning with its past while forging a future of free and inclusive community.”

The College Fix could not reach Metaxas for comment. As of Sunday it also does not appear that he has addressed this issue on Twitter or Instagram.

Sewanee states on its website that the university is “committed to free expression … even though the comments may cause considerable discomfort or concern to others in the community.”

But the university has revoked an honorary degree in its recent past.

In 2018, it revoked Charlie Rose’s honorary degree after months of pressure to take action, the Episcopal News Service reported.

In a statement emailed to The College Fix on Monday, campus spokesperson Laurie Saxton said that the request regarding Metaxas is under review:

The ordinances of the University of the South provide for a process for the revocation of an honorary degree. In this four-step process, a written request to revoke an honorary degree is submitted to the vice-chancellor, who shares it first with the Joint Regent-Senate Committee on Honorary Degrees, then the University Senate, and finally the Board of Regents. Each body must decide, by a two-thirds majority, to proceed toward a revocation before the process moves to the next body.

In the case of Eric Metaxas’ honorary degree, the vice-chancellor has received a petition requesting the revocation of his degree and (as of Oct. 11) has sent that request to the chair of the Joint Regent-Senate Committee on Honorary Degrees to be shared with the committee members. So the process is underway, and still in its early stages. Though each group is expected to consider the request as expeditiously as possible, there is no set time limit for that consideration.

Discussions of the revocation of an honorary degree, like those focused on the awarding of such a degree, are confidential at every point in the process.

Metaxas’ 2015 speech from when he received the honorary degree remains up on his personal website.

At the time he told his audience:

My faith cannot flourish if I cannot practice it freely. That was not possible in England or in other places in Europe, so our Founders determined it would be at the heart of American freedom. Freedom of Religion.

Religious Liberty. They understood that this was the genius at the heart of the whole thing. It was the bedrock beneath all the freedoms.

We must have Religious Freedom and we must tolerate and even encourage those voices and that freedom even if and especially if we disagree with them. As I say, this is at the heart of freedom and at the heart of liberal education.

Alumnus R.G. Cravens, who penned the petition against Metaxas, told the Times Free Press that revoking Metaxas’ degree would be in keeping with Sewanee’s position on free speech.

“It’s my belief and I think the belief of the other people who signed the letter that … Mr. Metaxas’s long history of anti-LGBTQ bigotry and his support for the Jan. 6 insurrection, that that’s contrary to those values [free speech],” Cravens said. “We’re asking the university to follow through with the values that it’s already said it believes.”

Editor’s note: The article has been updated to include a comment from the university spokesperson.