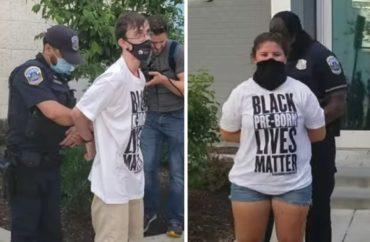 She allowed Black Lives Matter activists to paint DEFUND THE POLICE right next to it – also in permanent paint.

Given this green light for political expression in favor of black lives, pro-life students started writing “Black preborn lives matter” in chalk on the public sidewalk outside a Planned Parenthood facility in D.C. Police arrested them before they could even finish.

Students for Life of America, the black conservative Frederick Douglass Foundation and their staff members have now sued the city in federal court, with an “as-applied” constitutional challenge to D.C.’s so-called defacement code.

“While such laws are intended to prohibit criminal activity, they may not be used as a tool to silence disfavored speech,” the suit says. “But this is precisely what the District and the Defendants have done.”

The foundation and SFLA received a permit for their planned “assembly” in front of the the Planned Parenthood and “verbal confirmation from a police officer” that they could paint their mural on the street, just as Black Lives Matter activists had done, according to the complaint.

(The two SFLA-affiliated students who were arrested, Warner DePriest and Erica Caporaletti [above and in video below], are not plaintiffs in SFLA’s suit. Caporaletti is described in media reports as a student at Maryland’s Towson University, but DePriest is only identified as an SFLA employee, not a student. He told The College Fix he’s enrolled at Colorado Technical University.)

No enforcement until notified of pro-life message

When pro-life activists showed up early morning Aug. 1, “myriad police cars and law-enforcement officers” told them they’d be arrested if they even scribbled with “washable sidewalk chalk” on the public sidewalk in front of the abortion clinic.

SFLA and foundation staff “were prohibited from communicating their message, even though other messages are now permanently emblazoned along the streets of the District in a nearly identical format,” the suit says: “The only difference between the Plaintiffs’ desired mural and the other permitted—and permanent—murals is the content of the message.”

The arrest of the students prompted SFLA Executive Vice President Angela Tina Whittington; Robert Gurley, president of the foundation’s Virginia chapter; and foundation volunteer Bill Cleveland, a former vice mayor of nearby Alexandria, to silence their own symbolic speech.

The suit challenges the explanation given by city agencies that the plaintiffs needed permits for their planned pro-life, pro-black mural. The activists who painted DEFUND THE POLICE – which is “visible from Google satellite view” – didn’t seek permits from the Metropolitan Police Department or Department of Transportation. (The suit includes several images of the murals from various angles.)

Yet “no punishment resulted from such unlawful activity” despite clearly violating the defacement code under which the two students were arrested, the complaint reads. It notes that the city only removed DEFUND THE POLICE more than two months later because of planned street work, not because the mural was unlawfully applied.

The city also did nothing in response to another clear defacement related to the Floyd protests – the “gallery wall for a wide array of protest art,” as a local publication called it, on the U.S. Chamber of Commerce building’s construction scaffolding. It remained up until August.

D.C. does not appear to have applied the defacement code to any of the plethora of “graffiti, painting, chalking, or street art” related to the Floyd protests, “despite the fact that such destruction of public property clearly violates” the law, according to the suit.

SFLA’s July 20 permit application (excerpt below) for the planned “assembly,” filed as an exhibit, makes clear that the group would be using “signs with paint supplies.” MPD approved the permit, the plaintiffs claim. (The Alliance Defending Freedom, which is representing SFLA and the foundation, told The Fix it didn’t have a copy of the permit itself. MPD earlier told The Fix it never granted a permit, and DOT never responded.)

‘You are not permitted to discriminate on the basis of viewpoint’

A police officer also gave Whittington, the SFLA employee, instructions on how to lawfully paint the “Black Preborn Lives Matter” message, by using “tempera paint.” Mayor Bowser’s laissez-faire attitude about political street painting had “opened Pandora’s Box,” the officer allegedly said, which is why police would not stop this particular mural either.

SFLA and the foundation amply informed the mayor and police leaders that they planned to paint the mural, reminding Bowser that by law she must “make a decision expeditiously” if the permit was rejected. She is not free to reject their message, the groups wrote, seeing that Bowser “opened the streets up as a public forum” when she allowed the DEFUND THE POLICE mural alongside her own:

You are not permitted to discriminate on the basis of viewpoint in making determinations relating to public assemblies in public fora.

Though she never responded, “Mayor Bowser apparently ordered the Metropolitan Police Department to be present at the FDF and SFLA event in order to stop the painting and chalking,” the suit says.

There are no guidelines governing the unbridled discretion of District officials and prohibiting them from discriminating against viewpoints when enforcing the Defacement Ordinance.

The groups said the city’s decision to single out their speech “serves no legitimate, or compelling, government interest”; it’s not “narrowly tailored” to such an interest; and it’s not “the least restrictive means” of achieving such an interest, suppressing “substantially more speech than is necessary” even if the city could justify the enforcement.

The city’s discriminatory action also violates the Fifth Amendment due process clause by treating the groups differently than “similarly situated” organizations, and First Amendment’s freedom of association by preventing them from gathering together to express their pro-life, pro-black views.

D.C. also violated the individual plaintiffs’ rights under the federal Religious Freedom Restoration Act by stopping them from exercising their “sincerely held religious beliefs that all life, from the moment of conception, is precious,” through pro-life activism. Selective code enforcement actually criminalizes their religious expression, the suit argues.

Their free-exercise rights under the Constitution were also violated because the challenged code is “neither neutral nor generally applicable” to them as the city enforced it: D.C. showed its preference for “substantially similar non-religious messages” and “other messages, done in an identical manner in permanent paint.”

The suit seeks a declaration that the defacement code was unconstitutionally applied to the plaintiffs, an injunction against such code enforcement, actual and nominal damages and attorney’s fees.