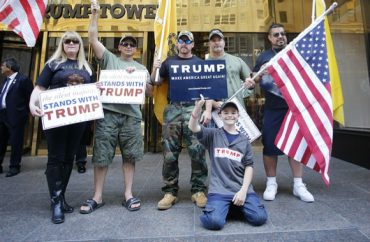 Two students who drove through Wellesley College to gloat a bit after Donald Trump was elected soon found themselves in the center of a massive social media uproar, accused of spitting on a student and yelling racial and homophobic slurs toward an African-American center on campus.

As a result, the pair was expelled from their fraternity, and a report of their alleged acts were sent to the attorney general’s office for review.

But now the duo, students at Babson College, have been cleared of the allegations lodged against them.

Students Parker Rand-Ricciardi and Edward Tomasso “denied the allegations, and an investigation by Babson found no evidence the men did anything other than drive through the campus waving a Trump flag out the truck window and yelling ‘Make America Great Again,'” reports the Boston Globe.

Campus leaders who were so quick to denounce the young men over the allegations are not so quick with apologies.

Jeffrey Robbins, an attorney for Rand-Ricciardi, said it’s a huge relief the witch hunt has been resolved.

“This has been an extremely difficult, painful five weeks for Parker and his family, one that has naturally taken a toll on them,” Robbins said in a statement. “They are grateful for the kindness and support of so many people, including both friends and complete strangers. Their hope is to spend some time decompressing and enjoying the holidays.”

MORE: Student booted for disagreeing Trump election as bad as 9/11