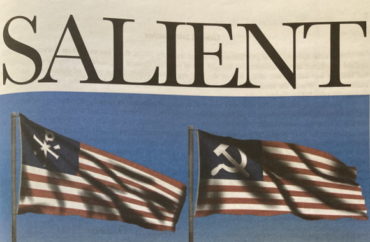 A group of undergraduates at Harvard University recently revived a publication to rectify what they describe as a scarcity of conservative and political thought on campus.

The Salient was originally founded as a “moderate to conservative” paper at Harvard in 1981, according to a report at the time.

Its folding in the early 2010s left a lack of thought challenging the predominant talking points on campus, and the newly returned Salient aims to resolve that.

“The drying up of discourse has been an inevitable effect of the end of the lone opposition paper; in the place of debate and intellectual exchange there is only the continual repetition of political maxims grown stale with the years, of truism and tautologies untested by disagreement,” its November 2021 general introduction reads.

It adds that there is also a “marked dearth, not only of conservative thought, but of political thought in general.”

Harvard student Jacob Cremers, spokesperson for the Salient, said in an email to The College Fix on Nov. 30 that the revival of the paper is meant “to fill the vacuum and to encourage diversity of opinion on Harvard’s campus.”

“The Salient has traditionally served as a source and platform of independent and contrarian thought at Harvard; it seemed to us a shame that it had vanished without leaving another newspaper to take its place,” Cremers said. 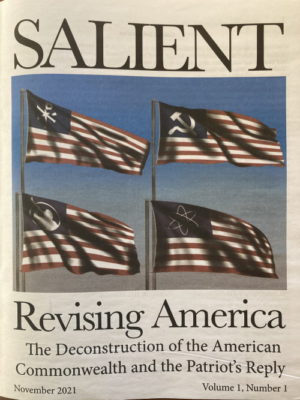 About 5,000 copies of the new edition were distributed, he said, including under the doors of every student dorm and over 800 faculty offices on campus.

The November 2021 edition was titled: “Revising America: The Deconstruction of the American Commonwealth and the Patriot’s Reply.” It featured eight articles written by students using pseudonyms.

“Pseudonyms are used in order to encourage freedom of expression and attract contributors who would otherwise be too shy of public exposure. The pseudonyms also allow readers to focus on the ideas communicated, rather than the writer behind them,” Cremers told The College Fix.

In the most recent publication of the Salient, one column offered Utah as a model for the rest of America, attributing its socioeconomic success to the centrality of the family and religion within the state.

Another explained the universality of the American Founders, characterizing them not as men to be worshipped but rather as examples of American virtue and principles to be followed.

Harvey Mansfield, a renowned conservative scholar and the William R. Kenan, Jr. Professor of Government at Harvard University, called the first issue of the reborn Salient “both very patriotic and very serious, an unusual combination,” he said in an email to The College Fix on Nov. 28.

“I am an adviser of the Salient and quite delighted to see it revived,” Mansfield said, noting that he has nothing to do with the content of the publication “except to like it when it appeared.”

The Salient encourages any Harvard students to write for the paper so long as their opinions are “well argued and rationally defended,” the general introduction to the paper stated.

“We do not expect agreement. We expect controversy. We hope, however, that those who disagree will offer their own views in as sincere a spirit of open debate as that in which the views articulated here are offered,” the introduction continued.

The endeavor is being funded by alumni and others interested in helping the Salient fulfill its mission, Cremers told The College Fix.

The Salient plans to publish two to three times per semester.