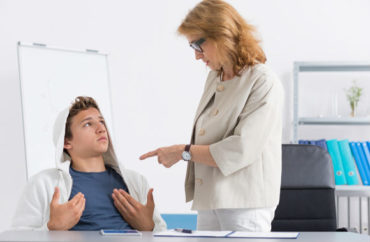 A teach-in course at Bucknell University aims to be an “examination of power and privilege” in the #MeToo era, with a special emphasis on how the topic manifests itself on campus, according to a photo of a flyer describing the offering obtained by The College Fix.

Titled “#HereToo,” it is a quarter-credit course set for this spring offered on alternating Mondays at the private liberal arts college in Lewisburg, Pennsylvania. It will “collectively explore politically charged issues,” according to the flyer. “They are meant to be practical, participatory, and oriented towards action.” 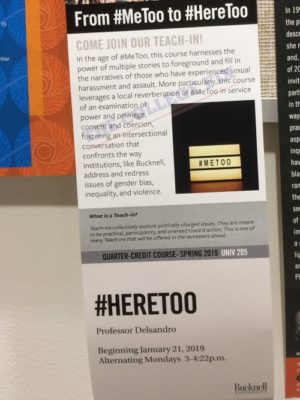 #HereToo will harness “the power of multiple stories to foreground and fill in the narratives of those who have experienced sexual harassment and assault.” This will be accomplished by analyzing issues of consent and coercion.

Additionally, the teach-in course will attempt to be localized, according to the flyer. It will have an intersectional lens that will analyze how Bucknell addresses issues of “gender bias, inequality, and violence.”

Its professor, Erica Delsandro, declined to comment on questions from The College Fix asking for more specifics, including what particular instances of gender bias, inequality, and violence will be discussed, and what sort of speakers, if any, will be involved.

According to a Bucknell University social media post, Delsandro has taught on similar topics before in a “360 class” called the “History of Sexuality.

“Being able to relearn sex and sexuality through a social constructionist lens reveals the way in which social forces…shape and shift our understandings of the sexed body, sexual interactions and sexual identity,” says Prof. Erica Delsandro. https://t.co/Rh5mfAYWzm pic.twitter.com/7RH6Feu9P5

“Being able to relearn sex and sexuality through a social constructionist lens reveals the way in which social forces … shape and shift our understandings of the sexed body, sexual interactions and sexual identity,” the professors is quoted as saying.