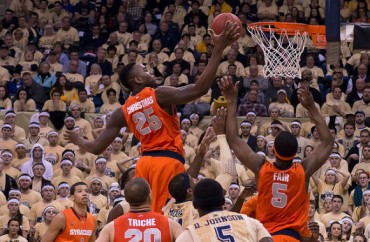 A University of Pennsylvania study shows that black male college athletes do not graduate at the same rate as their non-athlete peers.

Fifty-four percent of athletes “at the 65 schools in the Power 5 conferences” graduated in six years according to the study, whereas 58 percent of other undergraduates got a degree in the same amount of time.

Shaun Harper, director of Penn’s Center for the Study of Race and Equity in Education and author of the study, says black athletes are being “duped” by universities:

“It happens just about everywhere. Generations of young black men and their parents and families are repeatedly duped by a system that lies to them about what their life chances are and what their athletic outcomes are likely to be.”

“When coaches are looking for the best athletic talent, that’s what they’re looking for,” Harper said. “They’re not really concerned with academic talent.”

Harper said the solution is less likely to come from colleges than parents whose children are being recruited. He encouraged families to ask coaches about their overall student-athlete experience before committing to schools.

“Sometimes, young men get so excited about the prospect of playing for a particular place and coach,” Harper said. “We’re going to have to see more student activism, where black players say, ‘You’re going to graduate me, or I’m not going to play for you.'”

“You’re going to graduate me”? Isn’t the burden of making it through college primarily an individual responsibility? And isn’t it just a tad easier to do so … when everything is paid for?

In addition to Harper’s study, the Institute for Diversity and Ethics in Sport at the University of Central Florida released a report this week that shows a 75 percent graduation rate for black male basketball players on teams participating in the NCAA tournament — a 6 percent increase from last year.

Eleven teams in the 2016 Tournament have a 100 percent graduation rate, including Butler, Holy Cross, Duke and Villanova.