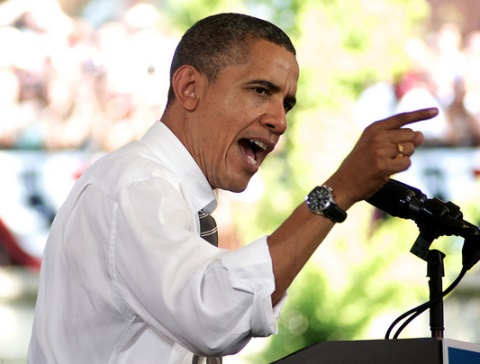 During last year’s presidential campaign, Democrats released a video appealing to seniors in which an actor resembling then-Vice Presidential nominee Paul Ryan pushed an old, wheelchair-bound woman off of a cliff as the screen read: “Republicans want to privatize Medicare.”

Democrats and Republicans alike “liberally use threatening rhetoric and images to persuade voters,” says one University of Arizona professor – and she doesn’t blame them, because scare tactics work.

Samara Klar, assistant professor of political science, zeroed in on the way different types of rhetoric are received by voters of differing identities, or Americans who identify with more than one group.

Her results, recently published in the Journal of Politics, found that political fear mongering – more than positive messaging – can swing undecided voters, or voters who have several different loyalties and leanings, into one camp or the other.

Time magazine, which reported on her findings in an article titled “How Politicians Scare Voters to Their Side,” noted:

“ ‘The threatening prime appears to increase worry, or anxiety,’ Klar writes, and the effect of that feeling becomes ‘an insurmountable counterweight’ in situations where two parts of a person’s identity are at odds on policy. The message for speechwriters? Fear is a great motivator.’ ”

So that patriotic veteran who is also a libertarian and a Medicare recipient? He may vote for whichever political contender scares him the most into it.

Klar, in an email to The College Fix, expanded on her results.

“Whether this shows weakness on the part of our leaders is a matter of debate,” she said. “On one hand, threatening tactics detract from actual issues and minimizes their obligation to provide factual facts and figures. But on the other hand, one can see why this might simply be an effective campaign strategy — and, in a sense, they would be foolish not to use it.”

She added: “One interesting thing that I find in my own research is that when two opposing campaigns both employ threats, they cancel each other out and neither threat has any influence at all over individuals’ preferences. So, ultimately, all these threats may be produce no benefit.”

But there’s no indication scare tactics will stop anytime soon.

Consider this: the 1960 presidential election was the first time in U.S. history that there was a nationally televised debate, and the first election that any information was communicated through mass media.  But today the use of mass media is obligatory, and political fear mongering commonplace.

Take the Affordable Care Act, a major topic shaped in the eyes of the public by harnessing people’s anxieties.

On the left, just think of that image of a Ryan-lookalike sending an old woman to her death over a cliff. Plus, President Barack Obama spent more than $100 million on attack ads to help get himself re-election last fall.

On the right, Republicans used the term “death panels” to describe the Independent Payment Advisory Board in which the directors, whom are appointed by the president, are supposed to make proposals to reduce Medicare funding under Obamacare.

More recently, a conservative group has launched a series of political memes aimed at college students in which a very creepy-looking Uncle Sam gives pap smears and prostate exams to young people, with the tagline: “Don’t let government play doctor.”

Writing recently in U.S. News and World Report, political commentator Peter Roff says such vivid imagery, what he calls “hard-hitting truthful ads with plenty of shock value” could be “what is needed to re-awaken the American people to the coming disaster that is Obamacare.”