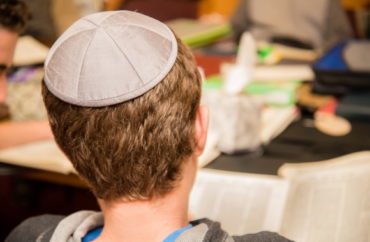 Diversity, equity, and inclusion staff often act as “political activists” and contribute to hostile conditions for Jewish students at universities, according to a study recently published by the Heritage Foundation.

Jay Greene, senior research fellow at the foundation’s Center for Education Policy, and James Paul, director of research at the Educational Freedom Institute, co-authored the December report, titled “Inclusion Delusion: The Antisemitism of Diversity, Equity, and Inclusion Staff at Universities.”

The study should help people understand that the “nice-sounding words” of diversity, equity and inclusion are “masking university programs that actually spew hate and division, particularly with respect to Jews,” Greene told The College Fix via email.

The study concluded DEI staff are “particularly unwelcoming toward Jewish students,” noting that this attitude may promote antisemitic sentiments at universities.

“The political activism of DEI staff may help explain the rising frequency of antisemitic incidents on college campuses as well as the association between college and graduate education and higher levels of antisemitic attitudes,” the report stated.

Greene and Paul searched the public Twitter feeds of 741 DEI personnel at 65 universities to reach their conclusion, comparing their statements on Israel to those on China for comparison.

The authors searched for key terms such as “Israel,” “Palestine” and “China” mentioned in tweets, retweets and “likes” of tweets connected to the DEI staff accounts.

One such tweet by a Multicultural Student Center staff person stated, “Condemn the Apartheid State of Israel for their Human Rights Violations against the Palestinian.”

The word “apartheid” appears 43 times in reference to Israel in DEI staff public communications, the study found. The word “colonialism” occurred 39 times, and the word “genocide” appeared nine times in tweets regarding Israel.

The study asserted that the tweets, retweets and likes of DEI staff involve instances of antisemitic qualities according to a definition of antisemitism composed by the International Holocaust Remembrance Alliance.

“The frequent use of words such as apartheid and colonialism are meant to portray Israel as a racist endeavor and deny its right to exist as the homeland of the Jewish people,” the study stated.

Greene and Paul also pointed to the “double standard” evidenced by “the sparsity of criticism of China relative to Israel,” since the study found that “DEI staff were less likely to offer criticisms of China than of Israel, and those criticism tended to be less strongly worded.”

Greene, in his email to The Fix, said that rather than “welcoming diverse students, these programs are actually left-wing radicals being paid with taxpayer subsidies and tuition dollars.”

“Universities need to dramatically scale back these programs and ensure that they focus on the legitimate goals of welcoming students.”

Andrew Pessin, campus bureau editor for the Algemeiner and a professor at Connecticut College, told The College Fix on Dec. 27 that the study confirms what he has been “seeing anecdotally for the past several years, that DEI staff tend to be problematically hostile to Israel.”

“They’re welcome to their personal opinions of course, but if their job is to create an inclusive environment for all students on a campus, that must extend to Jewish and Zionist students as well, who have just as much right to a safe campus environment as anybody,” Pessin said. “It’s hard to do that when you’re busy bashing Israel all over social media.”

The report triggered “a significant reaction” in social media and other news coverage that has mostly agreed with the conclusions of the study, Greene told The College Fix.

“Essentially, our research documented what many people suspected to be true. Now that the facts are more firmly established, people feel empowered to take action to reign in DEI programs,” Greene said.

A coalition of 2,000 rabbis called for a halt of DEI efforts in response to the study, Fox News reported.

“We believe that universities should suspend all DEI programs pending a comprehensive review of how candidates are selected for staff positions, because those harboring what should be obvious disqualifying biases were apparently identified on literally dozens of campuses with influence over thousands of students,” Rabbi Yaakov Menken, managing director of the Coalition for Jewish Values, told Fox News.

Negative reactions to the report mostly consist of doubts over whether the documented anti-Israel bias constitutes antisemitism, Greene said to The College Fix.

“We address this in the report noting that the double-standard and hate-filled language used to attack Israel clearly cross the line to being antisemitic,” Greene said.