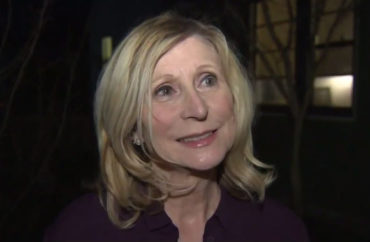 Campus “progressives” are showing their, er, “tolerance” yet again, this time regarding an upcoming appearance by “Factual Feminist” Christina Hoff Sommers at Boston’s Suffolk University.

According to the Young America’s Foundation New Guard, when the campus YAF put up posters advertising the April 18 event, Suffolk Assistant Dean of Students Dave DeAngelis informed the group the placards “triggered and offended” students, and violated a school guideline.

As a result, the Office of Student Life and Involvement informed the YAF the advertisements would have to come down.

When the YAF asked which guideline they had violated, it was told “the policies ‘are not published yet.’” How convenient!

Suffolk officials ultimately caved after the YAF persisted in pointing out that enforcing an unwritten regulation “only proves that the school is kowtowing to intolerant leftist demands.”

More from the story:

SU YAF, however, refused to let the university get away with efforts to silence conservative speech. “If [Suffolk University wants] to stand on the wrong side of a human right, so be it,” Tony DiMauro, Chairman of SU YAF, objected. Rather than accepting the attempts by school administrators to quiet them, the YAF chapter fought back by doubling down on their efforts to make sure every student at Suffolk University has the opportunity to hear from Christina Hoff Sommers. YAF not only continued to advertise around campus and on their social media, but called on Suffolk University administrators to stop cowering behind unwritten policies in attempts to suppress conservative speech.

This week the intolerant leftists who make up the “Suffolk Students Against Hate” announced their plans to protest SU YAF’s lecture. The Facebook event is titled: “Student Protest: ‘Factual Feminist’” and features a cover photo proclaiming “PRIVILEGE IS REAL.” The details for their protest are sparse, but the organizers claim they’ll be holding a “sit-in” during Sommers’ lecture.

They also advertise an April 7 “Social Justice Summit” — the “most important part” of their “campaign against hate” — which will feature a 75-minute “protesting course.”