A recent national survey shows a lack of basic knowledge of U.S. history and civics among Americans, with a number of respondents not knowing the current Supreme Court Chief Justice, or thinking Alexandria Ocasio-Cortez authored the New Deal instead of President Franklin D. Roosevelt.

Conducted by the American Council of Trustees and Alumni, “America’s Knowledge Crisis: A Survey on Civic Literacy” found shortfalls in American’s knowledge of history and how their country operates.

The survey polled 1,002 people — 61 percent of whom received or were receiving a college education — on various civics, government and history questions. Conducted in August with the results released last month, it found that 63 percent of respondents did not know the term lengths of U.S. senators and representatives.

Only 12 percent of college graduates surveyed knew the relationship between the Emancipation Proclamation and the 13th Amendment, and only 15 percent identified correctly that James Madison is the “Father of the Constitution.”

The council is a nonprofit organization that works to advance academic freedom, excellence and accountability in higher education.

“I think it would surprise people to learn that only 18 percent of colleges and universities today require what you may call a foundational course in American politics or government or American history,” Pidluzny said.

ACTA’s 2019-20 “What Will They Learn?” report, also released last month, showed that only 18 percent of colleges and universities include an American history or civics course in their general education requirements. The report assessed 1,123 college and university general education programs each year to see if they include key learning subjects such as literature, composition, and U.S history or government.

Pidluzny said that general education courses like these give Americans “a shared fact-based context to talk about policy issues.”

“I think that curriculum problem is the biggest,” Pidluzny said. “And that kind of spreads to K through 12, because the universities are where we train our teachers, our social studies teachers, so if they’re not taking rigorous, foundation courses in American history and government then they’re not prepared to teach in middle school and high school.” 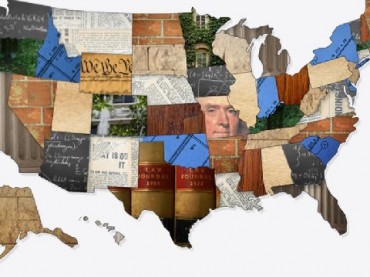 The typical foundation course is often a broad, chronology course that may reach from America’s founding until the Civil War or from the Civil War through the middle of the 20th Century. But with only 18 percent of schools requiring these courses, many universities that include it in their general education offer classes that are only slightly related to U.S politics, he said. Pidluzny offered the example that a student might have a class on baseball or on some sort of niche element of American history that would count where a civic course used to count.

Pidluzny said the first step to solving this problem is to raise awareness that there is a problem, and then promote action and leadership by encouraging board members to approach their curriculum committees to make the changes needed to include American history or civics classes, as well as encourage donors and alumni to present their concerns to their alma maters.

“I think the future will be very grim if things don’t change,” he said. “I think one of the underappreciated benefits of solid foundational courses, like civics courses, is that it helps to build a shared factual context that allows for more civic discourse.”

“If you go all the way back to 1945, there’s a very famous Harvard study called ‘General Education for a Free Society,’ and one of the things it said was that in a democracy, the citizens need to have a sense of shared purpose that comes from learning about the American democracy, so we can have good conversations about policy problems that face us.”

He added that in his 10 years of teaching American history, it’s exciting to teach when beginning from the perspective that the American founding was a unique event in human history.

“No other country has ever been dedicated to the proposition that all men are created equal and that the country should protect everyone’s right to pursue happiness,” he said. “It hasn’t gone perfectly, but through all kinds of struggles, a lot of the injustices that were there at the beginning were removed.”

“So I think it’s one of the most exciting things a person can study when it’s done well, and I think we do a real disservice to American college students when we don’t require students to have exposure to those big ideas.”

MORE: Most top colleges do not require students majoring in history to take U.S. history class

About the Author
Jessica Resuta
College Fix contributor Jessica Resuta is a student at Franciscan University of Steubenville majoring in journalism.