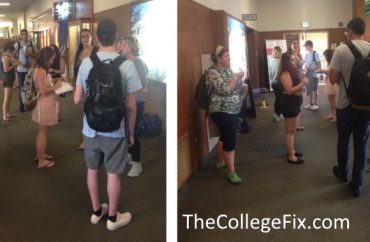 It appears outrage over the recent decision at Michigan State University to open a 91-year-old women’s-only study lounge to men as well — in compliance with Title IX — is relatively minimal.

A “Take Back The Women’s Study Lounge” sit-in that launched Wednesday at 9 a.m. and continued through 2 a.m. Thursday appears to have attracted only about a couple dozen protestors, this at a campus than enrolls some 40,000 undergrads.

Organizers of the event billed it as a success on Facebook because they collected 601 petition signatures throughout the course of the day. But actual participation in the daylong sit-in appears sparse, according to photos taken by The College Fix (shown above) and others posted on social media.

A College Fix representative went by the sit-in at 1 p.m. and said he saw only a handful of students standing about in the hall near the lounge. (Participants agreed not to protest inside the actual lounge to maintain its integrity, they stated on Facebook). He went back at 5:30 p.m. and said it was much the same.

“I saw maybe five girls standing around,” the Michigan State student told The College Fix. “Maybe three people petition gathering. … No signs. No chants. You wouldn’t know it was a protest or a sit-in just by looking at it.”

During the day, participants gathered signatures, as well as collected testimonials from students who want the lounge to remain only for women and adhered those statements to a sign near their demonstration. Also on hand were “free zines on consent, understanding patriarchy, women’s health, sexual assault, and white privilege,” a Facebook status from one participant stated.

The State News campus newspaper described the daylong demonstration as “people filtering in and out throughout the day.”

The climax of the event was a testimonial reading around sunset outside the building.

“Many stood on the steps of the Union and told their emotional stories, as the 91 years of history of the Women’s Lounge disappeared without a discussion between the students and MSU,” the State News reports. A photo of the readings posted on Twitter shows roughly 17 people in it.

Student Sit-In Protestors for the Women’s Lounge outside the Union. They’ll be here till 2AM. @thesnews pic.twitter.com/wX55h76a5u

“We want equitable treatment, and that’s what this is really about,” an organizer told the State News on Wednesday.

According to protest organizers on Facebook, their leadership has meetings set up with campus administrators to further lobby their cause.

Meanwhile, the man who spurred the decision to make the lounge co-ed, Mark Perry, professor of economics and finance at the University of Michigan Flint, said in a statement to The College Fix on Wednesday that the lounge does not need to return to its women-only status.

“For many decades Michigan State has openly and blatantly violated the civil rights of half of its student body … by maintaining a dedicated study space in a prime campus location in its Student Union that has only accommodated one gender – women. Perhaps MSU should issue a public apology for violating the civil rights of tens of thousands of male students on its campus for many decades,” Perry said.

Perry also pointed out women have earned a majority of college degrees every year since 1981 and that the Department of Education estimates that by 2026, women will earn 150 college degrees at all levels (Associate’s, Bachelor’s, Master’s and Doctor’s degrees) for every 100 degrees earned by men.

“Women now dominate higher education, and it is men who have become the ‘second sex’ at the college level,” Perry stated, adding the president and provost of MSU are both women.

“What MSU women now seem to be saying is that they want ‘special treatment” and ‘female privilege’ at the same that they claim to seek ‘gender equality,'” Perry continued. “They can’t have it both ways: If they want ‘equal treatment,’ they can’t demand special treatment or special privileges that aren’t offered to men, e.g. they can’t demand a Women’s Only Study Lounge. To demand a special study space for women actually reinforces the outdated stereotype that women are weak, inferior, fragile, and delicate, and therefore need to be accommodated with special treatment that men don’t have, rather than equal treatment.”