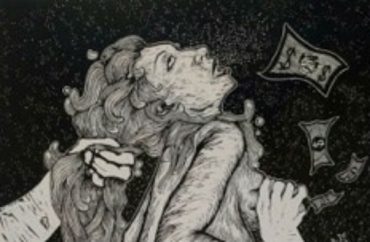 There are many ways to depict the effect of the Dakota Access Pipeline, approved earlier this year by the Trump administration, on American Indian communities in its path.

One of them is by sodomizing a pregnant woman.

The MacIver Institute, a free-market think tank in Wisconsin, flagged the artwork at the University of Wisconsin-Madison that is part of the “First 100 Days” exhibit, which puts President Donald Trump and his actions in a negative light:

“This image briefly concludes what happened to the Indian tribe. I can’t believe Trump would do anything for economic benefit. I would like all viewers to think about the relationship between humans and nature,” Shi states in the notes.

The painting is priced at $60.

Wisconsin radio host Vicki McKenna has photos from the exhibit, including the full Shi painting (cropped above) and another with Pinocchio talking to Trump.

The exhibit is the work of the Wisconsin Union Directorate Art Committee, which is partly funded by “segregated university fees” paid by students separate from tuition, committee adviser Robin Schmoldt told The College Fix in an email May 10.

Schmoldt said taxpayers do not fund the Wisconsin Union, as claimed by the MacIver Institute, and it is a self-supporting “auxiliary unit” of the university’s Division of Social Education.

Committee Director Yusi Liu told The Fix in an email May 8 that the committee “accepted all pieces submitted” to the exhibit as long as they were “Madison area artists,” and it wasn’t connected to a UW-Madison class.

“The exhibition jury guidelines required that all submitted works be considered in a neutral manner by the jury,” Liu said.

Art-related programs received $17,350 this fiscal year, while the entire Wisconsin Union Directorate received $778,981, an 11 percent increase over the previous fiscal year, according to the union council’s January meeting minutes. 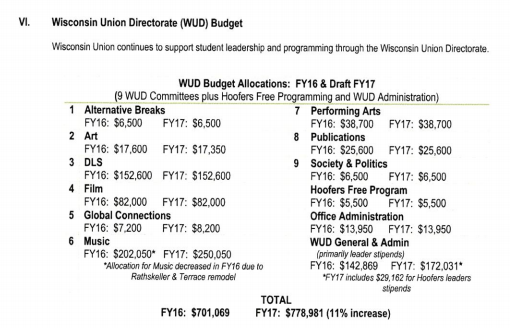 McKenna wrote on her website that she could not “in good conscience” post the anal-rape depiction on her own personal site.

She notes that the outgoing chair of the university’s student council, Carmen Goséy, just released a farewell letter that declares “all white people are racist” and that the university “perpetuates and suppresses the voices that are the most vulnerable”:

CORRECTION: The Wisconsin Union is not funded by taxpayers, but is partly funded by student activity fees, the art committee’s adviser told The Fix after this post was published. The post has been amended accordingly.