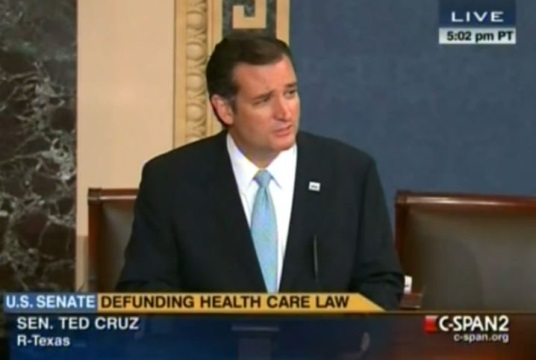 “In Funding Fight, Republicans Back Away from Ted Cruz” — that’s the headline at the New York Times this morning as I write this. Perhaps no headline could more succinctly sum up the failures of the establishment, old-guard leadership in the GOP, whose jealous disregard for a younger, more passionate, and more principled politician like Cruz is matched only by their apathy in the face of a law that is sure to speed America toward a future of European-style democratic socialism.

Meanwhile, the Texas senator continues his long lonely stand against Obamacare on the Senate floor. He has been speaking now for about 18 hours. By this afternoon, he may have the record for the longest filibuster (yes, it is one, despite Harry Reid’s assertion to the contrary). But, more importantly, he will have the increased respect of millions of young people who are looking for leaders who stand for something.

Among the top trending terms on Twitter right now are #MakeDCListen and #StandWithCruz. Republican leaders may be “backing away” from Cruz or ignoring him altogether, but it is certain that he has the attention of young, social media-using Americas.

Young people are paying attention today because they finally see, in Mr. Cruz, someone who understand the peril our republic faces and is willing to do whatever he can to reverse course. In Cruz, they see a man driven by principle.

Contrast that to the statements of old-guard Republicans to the press. Orin Hatch told the Washington Post yesterday, “We’re in the minority. We have to find a way of standing up for our principles without immolating ourselves in front of everybody, in a way when we don’t have the votes to do it.”

Not an encouraging word, not a statement of moral support. Just a blanket dismissal of the one man willing to spend his strength utterly in order to protest this dangerous and unprecedented shift toward state control of the private economy.

After Obamacare, America will never be the same. We are following in the footsteps of our economically hamstrung, welfare addled allies in Europe. We are extinguishing the flame of liberty, independence and industry that have always been at the core of the American spirit. We face a future of death panels, health care rationing, dependency, exchanging liberty for the phantom promise of security and a hundred years of darkness beyond. Cruz knows it. And even if he can’t stop it, how could not try?

There’s a risk of hyperbole at a moment like this. On the other hand, I think it’s hard to overstate the historical importance of this moment in American political history. But anyone who doesn’t understand that the nature of our country is about to change in a fundamental way does not understand the full implications of Obamacare. It’s about more than health insurance. Instead it is a new frontier of government power over our private lives. The lines between state and citizen are being redrawn.

For the first time, the government has seized the power to compel us to purchase a commercial product. The cost of insurance is going to skyrocket, but that isn’t the worst of it. The real danger of Obamacare lies in its power to encourage government dependency. It is only a matter of time until we descend fully into socialized medicine–the single-payer government controlled system that Democrats have long been fighting for, knowing full well that such an entitlement will secure them favor at the ballot box with untold millions of voters.

There are two ways to look at today’s historic marathon speech in the Senate chamber. To take the cynical view, one could say that Cruz is simply seizing the spotlight for his own political advantage. With an eye on running for the White House in 2016, he’s merely grandstanding. The other view, however, is that Cruz is doing all that he can (and maybe it isn’t much) to fight back against the overwhelming tide of liberalism that threatens the heart of America today. He’s standing on principle. He’s doing anything he can to make America, and his fellow members of Congress, pay attention. And if they were smart, they would pay attention. Because there is an entire generation of conservative young people out there who desperately want a noble cause to fight for. They desperately want to #MakeDCListen. Cruz is their voice.

Yes, young America is listening to you, Mr. Cruz. As long as you are able to stand and speak today, you will have the support of those who love this country and believe the liberty so many have bled for is not something we ought to allow Obama and his acolytes to destroy. It’s not something we ought to stand by and observe with tired resignation. The stakes are too high. No, we will not take defeat lying down. Whatever the final outcome, today we #StandWithCruz.