Officials at Philadelphia’s Temple University are reviewing a video which features a white student and references to the campus neighborhood as a “ghetto.”

According to The Philadelphia Inquirer, the video shows the student “in front of images of rowhouses, some with boarded-up windows” along with the caption “going to a city school and walking two blocks off campus for a party.”

The recording’s accompanying audio comes from “The Real Housewives of Atlanta” in which one of the show’s protagonists says “ghetto” over and over.

Although the video was removed from TikTok, it was shared elsewhere on social media. Temple’s Twitter account said the recording was “unacceptable and deeply concerning,” and that it was “currently being addressed.” 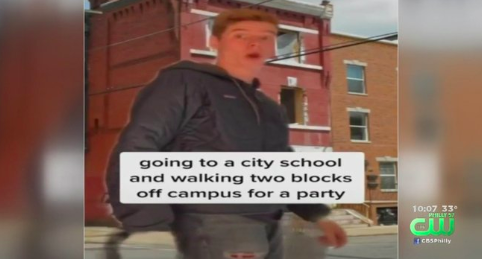 The Temple News reports the student offered an apology through the publication:

“The video does not reflect the person that I am […] I have started the process of educating myself about the surrounding neighborhoods by speaking with people who seek to teach others like me about local community issues and I would like to be a part of the dialogue on these issues going forward.”

From the TN story:

The student in question had been provisionally accepted to serve as an Owl Team Leader earlier this semester but the offer was rescinded when Temple administration was made aware of the video, said Ray Betzner, a spokesperson for the university.

Owl Team Leaders are responsible for assisting with summer orientation for new students. The student who posted the TikTok had not yet gone through the orientation and education sessions required for leaders, Betzner said.

“Part of what they learn is that as ambassadors and representatives of Temple University, the things that they post on their personal social media are to be construed as being representative of the university,” Betzner said.

The Temple University Progressive NAACP called on both the student and the university to apologize earlier today in a press release that was posted on Twitter and Facebook by Gary Lawery, the organization’s press and publicity chair.

Numerous individuals on Twitter, including African-Americans, didn’t think the video was all that big of a deal:

Joey asked, “Are they really trying to claim North Philly isn’t the ghetto?”

“Cut it the fuck out. This is not offensive. It’s what we, who actually live here say daily. 2 blocks off campus is the hood….” added MusicSyncs.com