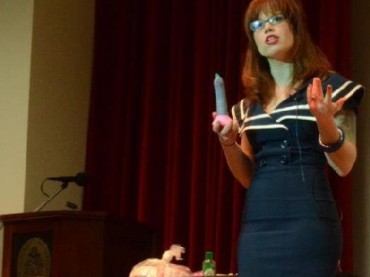 A Tennessee state senator has introduced a bill to change the way universities dole out student fees at public universities in the wake of a controversy over the University of Tennessee’s decision to spend $25,500 on what many have deemed an extravagant and salacious Sex Week.

“It is sort of like the inmates are running an asylum,” state Sen. Stacey Campfield, R-Knoxville, said Thursday in an interview with The College Fix, referring to the university’s Sex Week agenda, scheduled for the first week of March. The weeklong observance is slated to include events such as a drag show, stripper-inspired dance class, “understanding sexual identity” art show, aphrodisiac cooking class, and a sex trivia night called “Suck It, Trebek,” according to the online schedule.

“Is this really what we need to be spending our money on?” Campfield said.

Sex Week will cost about $25,500 to put on. Approximately $20,000 of that comes from mandatory activity fees collected from students each semester; $5,000 comes from the university’s Ready for the World campaign; and $500 from the history department, according to editor-in-chief  RJ Vogt of The Daily Beacon, the school’s independent student-run newspaper.

Campfield said that allocation does not make any sense.

“If we are going to dole student activities fees to speakers, it should be doled out proportionally to the kids in the club,” Campfield said.

“Two wolves and a sheep deciding on what’s for dinner is not democracy,” he also added.

However The Daily Beacon’s Vogt, in his column, argued that the university uses only .27 percent of student programming fees to educate the students on the one thing human life depends upon. He referred to sex as “the one thing American culture – rightly or wrongly – values the most.”

“Sounds like a great idea, and not just to me,” Vogt writes. “Four thousand attendees participated in Sex Week 2013, helping UT to join the likes of Columbia and Brown University (both in the Top 10 of Trojan’s Sexual Health rankings) as one of the first 10 universities in the nation to hold an educational event about sex.”

Mandatory student fees at UT come in at $275 a semester per student. As a publicly funded university, UT also receives funding from both the state and federal government.

With that, Campfield has taken the lead among a group of state lawmakers to change the way money is handed out for campus activities there.

He said there have been far more liberal speakers than conservative speakers at the university, which is not representative of student participation in organizations. What’s more, the senator says most parents he spoke to oppose Sex Week, and say they sent their kids to college to learn about math, science, English and the like.

UT’s sex week was organized by a student group called “Sexual Empowerment and Awareness at Tennessee,” which strives to, “foster a comprehensive and academically-informed conversation about sex, sexuality, and relationships.”