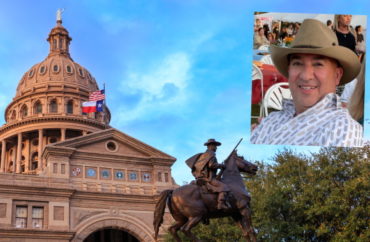 ‘The cost of college has been skyrocketing, and parents of state university students don’t want their money spent on political indoctrination or party politics or reverse-racism,’ legislator says

Texas Republican Representative Carl Tepper has introduced a bill that seeks to forbid diversity, equity and inclusion initiatives at all public universities in the Lonestar State.

The legislation, HB 1006, also seeks to mandate that all higher education institutions adopt a policy that “demonstrates a commitment to intellectual freedom and viewpoint diversity.”

And it would establish that public universities “foster a diversity of viewpoints” and “maintain political, social, and cultural neutrality.”

The legislation comes in the wake of the opening of Texas Tech’s Black Cultural Center in September, Tepper told The College Fix.

“College students and alumni should be able to appreciate distinguished black alumni (or any distinguished alumni) anywhere on campus.”

“I was disappointed that there would be such a segregated thing today,” Tepper said. “I think it’s obvious that segregation and self-segregation are dividing America.”

Texas Tech University did not respond to request from The College Fix seeking comment.

The University of Texas at Austin has also launched a substantial diversity, equity and inclusion campaign to make the school a “more diverse and welcoming campus.”

The 2020 initiative includes the $160 million Texas Advance Commitment and programs such as UT for Me, which supply eligible students, primarily African American students, with millions of dollars of additional financial support, according to a statement released by the UT president.

The strategy is a 17-pronged plan that includes efforts such as the reallocation of athletic revenue to more “worthy university programs,” renaming the Robert L. Moore building, and erecting statues dedicated to more diverse figures, according to the institution’s DEI agenda.

The University of Texas declined to comment on the proposed legislation.

Another public university in Texas, Texas A&M, boasts a Diversity Operations Committee staff of more than 50 members who are charged with the “collection of equity and climate data” and “diversity initiatives,” as reported by the college.

Texas A&M did not respond to a request from The College Fix for comment.

Tepper’s legislation, if approved, would likely upend DEI endeavors at Texas Tech University, UT-Austin, Texas A&M, and many others in the Lonestar State.

Not only have DEI programs proven to be ineffective, but they are also extremely costly, he said.

“The cost of college has been skyrocketing, and parents of state university students don’t want their money spent on political indoctrination or party politics or reverse-racism,” Tepper said via email. “They want their kids to graduate with skills for a better future.”

Tepper estimated the salaries of DEI personnel at Texas Tech to be more than $1,100,000 per year, which could supplement the cost of more than 45 out-of-state students’ tuition bills.

Not everyone agrees the bill is a good idea, however.

Tyler Coward, a senior legislative counsel at Foundation for Individual Rights and Expression, said in a statement the bill needs “substantial reworking” before it can be classified as constitutional.

Coward said the legislation has the potential to “enrich the academic experience and help foster a free speech culture on campus, longstanding goals of fire,” but is still “vague and overly broad.”

“This bill requires significant revisions to pass constitutional muster, and FIRE will work to ensure that the bill does not pass in its current form,” Coward said.

The bill states that any person who believes a college violates the legislation can seek “injunctive relief” against the institution to force them to comply. If injunction action is pursued, the court must provide “reasonable attorney’s fees and court costs to the person.”

“The legislation doesn’t interfere with free speech or even the discussion of current events or ideology. Just the state employee or professor taking a side or pushing their opinion at the cost of the other side,” Tepper said in an email.

The bill is scheduled to be considered during the 2023-24 legislative session.