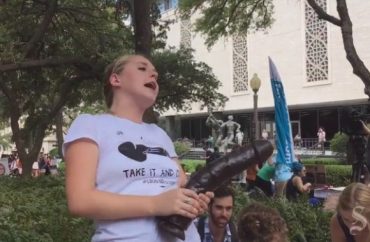 So says Rosie Zander, a College Democrat at the University of Texas who helped lead on Wednesday a “Cocks Not Glocks” protest on the first day of school. Zander made the comments to the Austin American Statesman in explaining that their goal was to “fight absurdity with absurdity” in protesting a new state law that allows people 21 and older with concealed carry permits to bring their weapon on campus.

Protesters are balls deep in the heart of texas #cocksnotglocks pic.twitter.com/YVkjFtGT1M

Wednesday’s protest marked the second time the “Cocks Not Glocks” demonstration has occurred at UT. The first one took place last October.

Underscoring all this, just three days ago a federal judge denied a request from three UT professors for a preliminary injunction to allow them to ban firearms in their classrooms, the Statesman reports: “U.S. District Judge Lee Yeakel of Austin said he found no precedent for the professors’ argument that they have a right of academic freedom under the First Amendment so broad that it overrides decisions of the Legislature and the university that employs them.”