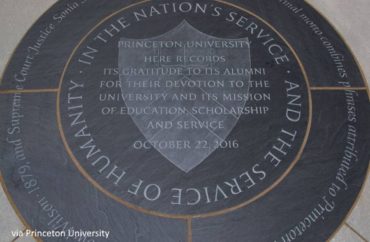 WASHINGTON, D.C. — University of Notre Dame political science Professor Patrick Deneen took aim at the “evolution” of the unofficial motto of Princeton University during a speech at the inaugural National Conservatism Conference on Tuesday.

Deneen, who previously taught at Princeton, mocked his former employer for changing the university’s unofficial motto in an attempt to be more “woke.”

The original motto, introduced in 1896, was “In the nation’s service.” It was introduced by then-university President Woodrow Wilson. That motto would last for 100 years, until a new president decided to change it.

Introduced in 1996, the new motto declared “in the nation’s service, and in the service of all nations,” ostensibly to reflect the Ivy League school’s growing international presence.

But this motto, Deneen said, was not “woke” enough.

And so, in 2016, yet another motto was unveiled. “In the nation’s service, and the service of humanity” was adopted three years ago by the university’s current president, Christopher Eisgruber. According to Princeton officials, the motto was inspired by alumnus Sonia Sotomayor, who had called for it to say “all members of the human community.”

“I think it will take only five years, maybe less, for Princeton to change that title, because it’s not sufficiently inclusive simply to indicate humanity. In the nation’s service and in the service of all intergalactic lifeforms,” Deneen predicted, drawing laughs from the audience.

Deneen said President Eisgruber called the motto’s changes over the years an “evolution.”

“Notice evolution only occurs in one direction in certain institutions,” Deneen said.

“The origin and evolution of Princeton’s unofficial motto is instructive,” Deneen continued.

“Nationalism as an ‘ism’ in American history, and especially as pronounced in the progressive period during the likes of the reign of Woodrow Wilson and the prominence of Theodore Roosevelt … was not the product of conservatives, but promoted by self-described progressives.”

Deneen said that the purpose of this early 1900s progressive nationalism was “to weaken more local, regional, neighborhood and particular forms of identity within the nation, that identification that had been the hallmark of much of the American political cultural experience.”

Deneen, author of “Why Liberalism Failed,” warned conference attendees of subscribing to a notion of nationalism that propped up the ideas of historical figures such as Theodore Roosevelt during his speech titled “Sustainable Conservatism.”

Roosevelt, Deneen said, argued that “local government should cede its activities to the national.”

“This refrain is found throughout the writings of the progressives of this period,” Deneen said, “the need to move the loyalties and identities of Americans from their local places and the people who they live closely with to a more abstract devotion to the nation and its ideals.”

To rebut that nationalism, “a nation that helps the parts,” to prevent placelessness, honors constraints, and an economy that respects dignity and doesn’t regard beings as widgets. 👏 @PatrickDeneen #NationalConservatism

Citing his example about the evolution of the Princeton motto, Deneen said that nationalism in America, as embraced by conservatives, had to evolve from the progressive idea of nationalism, and become more sustainable.

“The irony is that the destruction that has been wrought by an earlier nationalism, today needs to be corrected by an embrace of a new kind of understanding of the nation,” Deneen said, adding it’s the nation that assists the parts, the nation that supports people where they are, in their neighborhoods and communities and families.