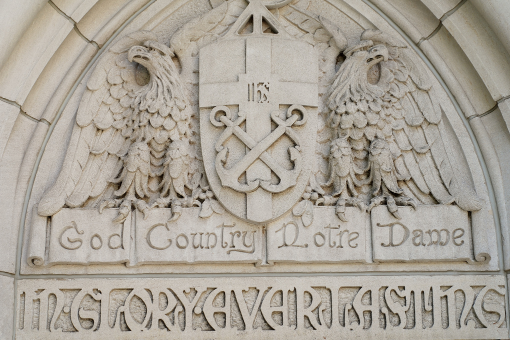 But an increasing number of people – devout Catholics, alumni, educators and students – question whether Notre Dame is irrevocably on the path to secularization. As a senior at Notre Dame, I count myself among the concerned.

Over my past three years here, I’ve observed that beneath the Catholic trappings of campus, disconcerting trends indicate a deeply flawed aspiration: the desire to be the best of two worlds, secular and Catholic.

Notre Dame wants to be viewed by its modern academy peers as “one of the guys,” while at the same time being distinctly and authentically Catholic. But in today’s society, this is impossible, and being on par with secular institutions has forced it to depart from its Catholic mission.

That departure can be traced in part to the Land O’ Lakes Statement on the Nature of the Contemporary Catholic University. The document, signed in 1967 by a consortium of Catholic university officials–including then-Notre Dame president Rev. Theodore Hesburgh–accelerated Notre Dame’s trajectory toward humanism.

The Lakes statement described a vision for contemporary Catholic institutions of higher learning central to which is the conviction that any “external authorities” – including the Church – inhibit Catholic universities from fully participating in the “total university life of our time.” The Catholic faith is thus seen at times as a “stained glass ceiling” that stifles Notre Dame’s potential.

The tension between the Lakes statement and John Paul II’s apostolic constitution Ex Corde Ecclesiae, which emphasized the Church’s authority over Catholic educational institutions, was on full display in fall of 2009, when the university chose to honor President Obama with an honorary degree against the explicit instruction of the local bishop (and more than 80 other American bishops as well).

The Obama episode has been the most public example of the tension at the heart of Notre Dame, but it was merely a fruit–not a cause–of a deeper and more gradual erosion of its Catholic mission and identity.

Fr. Malloy clarified later that a predominant number “refers to both more than 50 percent and not simply being satisfied with 50 percent. It’s an effort, without specifying a specific number, to take seriously that numbers and percentages make a difference.”

In the 1970s, the percentage of self-identifying Catholic faculty at Notre Dame was as high as 85 percent. In the mid-1980s, that statistic fell to just under 66 percent. By 2006 that number had sunk to about 52 percent. It has risen only slightly in the past seven years.

Even worse, while about half of faculty self-identify as Catholic, many do not embody the Catholic scholarship and witness that Fr. Malloy had in mind when he wrote that “percentages make a difference,” based on my observations and others over the years.

Students here do not receive from most professors robust religious or even general moral formation in the classroom, and the university curriculum requirements are a jumbled, fragmented mess of scattered course options. This is a serious problem and one which has been well-documented by the university’s most ardent champions of its Catholic character.

More so than the testimony of any numbers, however, Notre Dame’s Catholic mettle will be tried in the crucible of its relationship with an increasingly secular world, and it’s hard to see the administration being cured of its intoxication with relevance and popularity. These modern trends include but are far from limited to the pervasive liberalism of the academy in general; calls for “recognition” of the LGBT community that go beyond requesting charity and demand departure from the ancient Judeo-Christian sexual ethic grounded in complementarity; and an administrative insistence on “dialoguing” that comes off more as avoiding confrontation than relational bridge-building.

GK Chesterton once referred to the countercultural vitality of the Church by writing, “only live fish can swim against the current.” This is a fair litmus test to administer to Notre Dame: Is it willing to distance itself from secular standards of excellence when those standards run contrary to its own Catholic ideals, as they increasingly do? Can Notre Dame be a light to a nation in which higher education is dominated by an ideology so dismissive of the traditional institutions and values of our nation, and the Catholic faith to boot?

Responses to this question are truly mixed, but there are encouraging signs:

The university’s decision in 2012 to file suit against the Obama administration, seeking an exemption from the Health and Human Services (HHS) pro-abortion insurance mandate;

The campus presence of inspiring institutes and centers headed by courageous and outspoken advocates of the school’s mission, such as the Center for Ethics and Culture, the University Faculty for Life and the Institute for Church Life, headed by professors O. Carter Snead, W. David Solomon and John Cavadini, respectively;

The many wonderful professors who do embody and stand up for all that is good about Notre Dame. The theology department is particularly noteworthy in this regard;

The abundance of liturgical and sacramental opportunities – such as daily dorm Masses and the presence of priests-in-residence – readily available to the student body;

And the admirable number of student leaders, clubs and outlets that promote a Christian vision of the good and resist the reductive trends of progressivism. Mentioning merit among such groups are the Edith Stein Project, Right to Life club, Notre Dame Knights of Columbus and the Orestes Brownson Council, which offers free peer-to-peer course counseling for underclassmen seeking the sort of integrated education so hard to find on campus.

Meanwhile, however, peer pressures mount on Our Lady’s university, which already balances an onerous self-appointed task on its wearying shoulders: straddling a cultural divide, a foot planted in each side. As these pressures – which include the societal deconstruction of the institutions of marriage and the family, a topic that the administration has been lamentably reluctant to engage – grow, so too will the need for Notre Dame to stand firm. The university needs to root itself fast in its religious character and conduct if it wants not to be swept downhill. I believe it has the warriors – some faculty, students, alums and even administrators – willing to do so. Again, though, these are too few.

Yes, there is still hope for Notre Dame. But that hope will vanish when those who love her lose heart and cease to fight for what she stands for at her best.

It’s imperative that we continue to hope – and fight – for Notre Dame.

Fix contributor Michael Bradley is a senior at the University of Notre Dame.