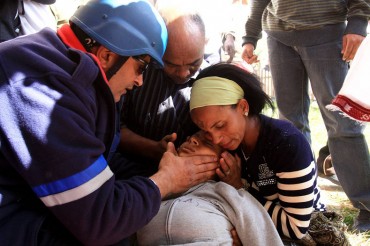 Tel Aviv, Israel: The past week has been a whirlwind of escalating violence in Israel. After years of ongoing rocket attacks from Hamas in the Gaza Strip, Israel launched its Pillar of Defense operation, assassinating Hamas leader Ahmed al-Jabari. For the following 8 days, they targeted numerous leaders of Hamas and struck over 1,500 strategic locations in the Gaza strip. But the Israeli government seems to have made a mistake when it accepted a “ceasefire” agreement Wednesday night, one that has already been broken and endangers Israeli lives.

Let’s review the actions of Israel’s enemies: In the 8 days of the operation, Hamas shot over 1,200 rockets (156 of which failed to launch and landed within Gaza). Hamas also launched rockets farther than ever before thanks to their friends in Iran who have been supplying Iranian Fajr-5 missiles. These rockets reached as far as Tel Aviv for the first time in 20 years.

Hamas also shot several rockets at Israel’s capital, Jerusalem, some of which actually ended up landing in Palestinian territories. They used human shields by firing rockets from locations near schools, mosques, and densely populated areas. And in what many have titled the classic Hamas justice system, they publicly executed at least 6 Gazans for allegedly “spying for Israel” and then dragged their bodies through the streets.

Finally, there was also a bus bombing in Tel Aviv that left 21 people injured, though it’s unclear which terrorist organization is responsible (they all like to take credit). Yes, they’re a really charming bunch those Jihadists, and we, the world, just pressured Israel into accepting a ceasefire with a group sworn to their annihilation.

While all this was happening, there was of course, outrage from the left wing in Israel and around the world, provoked by the typical biased commentary from journalists. Bob Dylan was right when he wrote that Israel is always portrayed as the “neighborhood bully” for not accepting terrorism.

There were numerous calls for a ceasefire from the start of the operation, but the agreement was made when Secretary of State Hillary got involved, leading one to suspect that Israel was threatened or given some kind of incentive (backing on Iran, withdrawal of funding?) to agree to the ceasefire. The US did agree to provide increased funding for the Iron Dome and to prevent Hamas from obtaining weapons in the first place – but the United State had already agreed to do that before this operation.

The terms of the agreement included a 24-hour ceasefire, and then Israel would start to ease the blockade on Gaza if things remained calm. It took effect at 9 PM (GMT +2) Wednesday night, but at 9:01 PM the sirens that warn of incoming rockets went off again. Since then, 12 rockets have been fired at Israel, and Israel has not retaliated.

Even if the ceasefire holds for a few days, it’s only a matter of time before Hamas continues the violence against Israel, and the world just expects Israel to take it.

As someone living in Israel, I, along with 70% of the population, am against the ceasefire. However, I’m not sure how effective a ground operation would have been because the rockets, ultimately, will not stop unless Israel chooses to re-occupy Gaza, which is something Prime Minister Netanyahu is clearly not willing to do if he accepted the terms of this ceasefire. Yes, I’m saying that Gaza may need to be occupied. They have demonstrated time and again that they are too unstable to even reach a peace agreement.

Israel unilaterally withdrew from Gaza in 2005 and since then they’ve been rewarded with thousands of rockets fired at civilian populations. Israel has done a great deal to alleviate the effects of these rockets: the Iron Dome, warning systems, bomb shelters, etc., but that fact remains that rockets are being fired into Israel.

It is not only the right, but the duty of the Israeli government to do whatever it takes to protect us. I should never have to run into a bomb shelter because Hamas is firing rockets at Tel Aviv, as I did, four days in a row this week. Israel’s response? Agree to a ceasefire – hours after a bus in blown up in Tel Aviv.

It is disappointing to say the least, to see Netanyahu cave to pressure from the Obama Administration, but I can only hope that there is a silver lining and this is part of a strategy I, and many others, don’t understand. Perhaps there are other factors that the public isn’t aware of. But the price, for we who live here, is high.

How many innocent people have to die, how many homes will be destroyed, how many children have to deal with trauma from their neighbors hurling rockets at them, before the Israeli government will stand up for itself? Until Netanyahu and the government figure this out, the people in southern Israel, and perhaps all of Israel, will continue living under the shadow of death and terror.