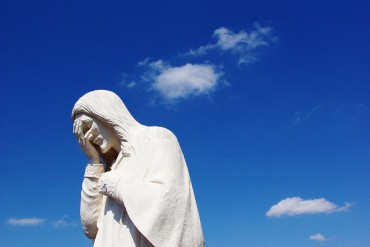 Universities across America show an outright disregard and disdain for Jesus Christ, a survey by The College Fix finds.

A look at hundreds of religious studies classes at universities across the nation uncovered that, for the most part, professors prefer to snub the subject of who Jesus was and what he preached. Classes that are focused on Christianity, meanwhile, tip-toe around or altogether avoid the topic of Christ’s teachings.

Jesus Christ is – without question – the most influential figure to ever walk the Earth, but professors clearly prefer to offer electives on much more obscure matters, the survey found.

The survey looked at class titles and descriptions categorized either directly under religious studies, or courses heavy with religious topics but filed under departments such as history, the humanities, political science or philosophy.

Of the 316 classes surveyed, only three focused exclusively on Jesus, compared to:

2 classes on witchcraft and shamanism;

2 classes on yoga and meditation;

3 classes on sex and religion;

3 classes on death and afterlife beliefs;

4 classes on religion and doubt/various conflicts;

5 classes on science and religion;

12 classes on women/gender and religion; and

14 classes on religion and culture.

Some of the electives are too difficult to even classify, such as: emergence, from biology to religion; suffering and transformation; anthropology of body and pain; religious dimensions in human experience; sport and spirituality; and a history of apocalyptic thought and movements.

University of Colorado at Denver’s 40-plus religious studies classes include “whores and saints,” “theories of the universe,” “Freudian and Jungian perspectives in dream analysis,” and “spirituality and the modern world.” No electives focused exclusively on Jesus, however.

How about Florida State University at Tallahassee’s 39 religious studies courses? Among them are “performance in Africa,” “human rights and crimes against humanity,” “religion and fantasy” and “abortion and contraception in ancient Christianity.” Nope, no Jesus.

Arizona State University’s 50 religious studies classes run the gamut from “anthropology of material culture” and “ritual, symbol and myth” to “what is religion” and “gender and peace.” Again, no Jesus electives.

In fact, the only religion class at Arizona State focused exclusively on Christianity is called “lost scriptures/lost Christianities,”and zeros in on the “wide diversity of early Christianity and its suppressed and lost texts, which have been found in modern times.” But rest assured, the campus offers four classes on Islam and two on Stalinism.

Over at Illinois State University at Springfield, the “History of Christmas” seminar spends its time “on the origins and development of the celebration of Christmas. Themes include early Christian Nativity traditions, the date of Christmas, devotional literature, liturgical texts, hymnography, art, global perspectives on the celebration, and Christmas traditions.”

This class is likely an opportunity in part for the professor to highlight the holiday’s pagan timing origins and minimize the season’s message of selflessness, reducing Christmas to something of a joke or materialistic boondoggle. (The class is not offered this semester).

While Jesus does headline three classes among the 316 surveyed, some other characters also got their own top billing, such as “the life of Muhammad,” “The Brothers Karamozov” (fictional characters), and “Martin Buber, thought and influence.”

Most of the 12 universities surveyed offered a hodgepodge of classes on a rainbow of religions, including Christianity as well as Islam, Buddhism and Hinduism.

But just because a class is on Christianity does not mean it will give much, if any, consideration or weight to the person of Jesus Christ or his teachings. He might get a lecture or two, if he’s lucky, but many course descriptions on Christianity classes don’t even include the word “Jesus” at all, the survey found.

Take, for example, intro to church history at Alabama State University, which surveys the church “from its beginning to contemporary times.” Talk about a broad brush.

Similarly, at the University of Arkansas at Little Rock, a Christianity class looks at “major developments in the history of Christian thought from its origins in the New Testament through the Protestant Reformation.”

An early Christian church class at the University of Connecticut hones in on “the evolution of Christian institutions, leadership and doctrines in the Roman Empire. … Topics may include gnosticism, prophecy, martyrdom, asceticism, pilgrimage, heresy (and) orthodoxy.”

Intro to the New Testament at Florida State University at Tallahassee looks at the Bible through the lens of “historical development of the early Christian church, ancient Judaism, and the wider Greco-Roman world.”

Boise State University’s early Christianity course studies “the rise and development of Christianity from its Jewish and Greek origins in the first century through its establishment and elaboration as the state religion of the late Roman empire in the fifth century.”

Nary a mention of Jesus, and so on and so forth.

When classes tackle Islam or other religions, it’s an “examination” or “understanding” of said belief systems; when the focus is on Christianity, terms like “critical analysis” can often be found, survey results indicate.

Moreover, the few classes on Jesus found in the survey don’t hone in on his teachings, but rather what other people said of him.

Take Georgia State University at Atlanta’s “Jesus Inside and Outside the Gospels” course. It’s a “comparative study of portrayals of Jesus as they have evolved over the past two millennia … and visual depictions of Jesus in modern media such as film, television and the internet.”

The University of Hawaii’s “Life and Teachings of Jesus” class is a “critical study” of gospels and of extra-Biblical sources.

And the survey’s third and final elective solely devoted to Jesus comes from Butler University in Indiana. Called “Historical Jesus,” it offers a “close look at Jesus of Nazareth, focused on sources and methods of knowledge about Jesus as a historical figure. Attention will also be paid to historical and cultural context, and to beliefs about and depictions of Jesus in early Christian literature.”

The point of all this is not to say students should be forced to study Jesus. But if this survey highlights anything, it’s that they’re not even given the option. Meanwhile the classes that do focus on Jesus or Christianity sidestep his message and teachings in favor of historical context and critical analysis.

NOTES: To produce a random sample of religious studies classes at universities across the nation, The College Fix focused on one mainstream campus from each of the state capitals in alphabetical order, excluding Alaska and Delaware. Twelve colleges were surveyed.

The surveyed focused on undergraduate studies only, and the data was compiled by searches of courses listed on universities’ websites and current class catalogues.