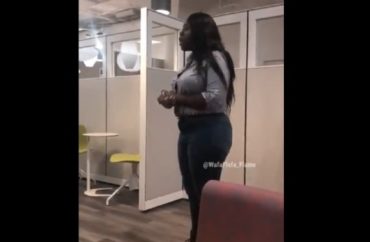 ‘Y’all should have seen how QUICK the white people packed their bags and left!’

An apparent University of Virginia student urged white people to leave the campus Multicultural Student Center, claiming that it is a “space for people of color” and that there were “too many white people” in the building, according to video that surfaced Wednesday afternoon.

The video, tweeted by the Young America’s Foundation, showed a young black woman pacing around a room while making a “public service announcement,” in her words:

If ya’ll didn’t know, this is the MSC [Multicultural Student Center], and frankly there’s just too many white people in here. This is a space for people of color. So just be really cognizant of the space you’re taking up, because it does make some of us POCs [people of color] uncomfortable when we see too many white people in here. It’s only been open for four days and frankly there’s the whole university for a lot of ya’ll to be at and there’s very few spaces for us. So keep that in mind. Thank you.

The video ends with a round of applause.

Leftists at the University of Virginia are dictating who is and who isn’t allowed in the new Multicultural Student Center.

“Frankly there is just too many white people in here, and this is a space for people of color.”

This kind of racist intolerance is NOT multicultural. pic.twitter.com/XkefKqfqLA

The Multicultural Student Center opened on Feb. 6 along with the LGBTQ Center, Latinx Student and Interfaith Student Center, according to a university announcement. The Cavalier Daily reported that the MSC and LGBTQ Center were relocations, and the other two are new.

Reached via phone on Wednesday afternoon, a representative of the student center said: “At the moment we’re not allowed to comment on this.” The student apparently depicted in the video did not immediately respond to a Twitter message on Wednesday.

The University of Virginia on Wednesday evening released a statement that did not actually mention the controversy. Instead, the university obliquely wrote that “some questions have been raised regarding the scope or inclusivity” of numerous student centers on campus. The school noted that the centers “are open to all members of the University community.”

UVA this month introduced four new and expanded student centers in Newcomb Hall. Since the opening, some questions have been raised regarding the scope or inclusivity of these centers and their missions. UVA provided the following statement on Feb. 12 to address these questions: pic.twitter.com/BJ3LZCvIrE

YAF identified the video as coming from the account of a user named WafaFlofa_Flame. The user shared the video Monday, referring to whites as “infiltrators,” according to an archived tweet.

Another Twitter user identified herself as the woman in the video starting Monday. “Y’all should have seen how QUICK the white people packed their bags and left!” one of those tweets reads.

While she has reveled in the publicity the video is getting, the user has since marked her YouTube and Twitter pages private.

why did I smack my lips like that when I said white people 😂 https://t.co/SmXZRIh1xY

Y’all should have seen how QUICK the white people packed their bags and left!

It’s Black History Month so I’m literally not going to respond to any hate that I’m getting from the video.
So many POCs are thanking me for speaking up about something they all felt and I’m going to uplift that. ✊🏿

Since y’all are on my page, go subscribe to my YouTube channel and watch my videos! ✨❤️https://t.co/BCtH6iHMIX pic.twitter.com/rRm8cLkumy

UPDATE: The University of Virginia released a statement indirectly referring to the video Wednesday evening. The student identified in the video made her Twitter account private after this article was published. Both have been noted in the article.