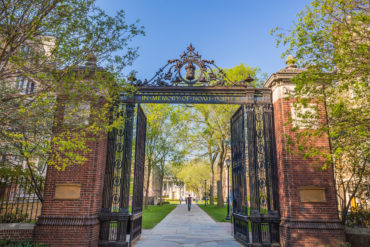 Related to the ‘napping while black’ incident last year

A Yale student who became embroiled in an international controversy that upended her entire life is demanding body cam footage from campus police officers, footage she says will exonerate her of claims that she was racist to call the police on a black student who had been sleeping in a dorm common room. The university, meanwhile, is fighting a freedom of information act request meant to force the release of the tapes.

Sarah Braasch, a philosophy graduate student at Yale University, found herself the target of prolonged, unrelenting nationwide anger last May when she called campus police on a black female student who had been asleep in a dorm lounge. Braasch was accused of having racist motives in calling the police, claims she has fervently denied over the past year and a half.

The story, when it broke, instantly went viral with the help of racial activists like Shaun King and other Internet personalities. As Cathy Young reported at The Bulwark in August, a tsunami of Internet rage followed, with prominent social media voices targeting Braasch and some commenters even demanding that she be criminally charged.

The student on whom Braasch called police, Lolade Siyonbola, along with numerous other Yale students, demanded Braasch be expelled. Rumors spread that Braasch was in favor of slavery. Campus officials publicly condemned the incident. She received death threats. Eventually she fled campus and has not returned, continuing her education from an unnamed southwestern state.

In an email to The College Fix on Tuesday, Braasch said she is currently seeking the release of the campus police body cam footage depicting her exchange with officers last May. She has filed a Freedom of Information Act request under Connecticut law, saying that the video will exonerate her of the repeated accusations that she is racist.

“I feel strongly that the footage, which I will immediately release to the public…reveals that the Yale Administration and Police told disgusting lies about me.  They knew the entire time that I was entirely innocent, and they knew that they were telling disgusting lies about me, grossly violating my Federal Civil Rights by doing so, and they knew that they were putting my life in grave danger, destroying my lifelong human and civil rights academic and legal careers, and probably driving me to suicide, which they almost did,” Braasch said.

Neither Yale nor the Yale Police Department responded to requests for comment about the footage on Wednesday. But Braasch said the university is fighting the release of the video.

Incident was not actually about ‘napping,’ plaintiff argues

Notably, Braasch claims that her reasons for calling the police were not directly related to Siyonbola’s napping in the common room. Rather, Braasch, after speaking to Siyonbola in the common room, claims she believed she was among a number of students who had been targeting Braasch in recent weeks. Braasch had previously called campus police on another black student whom she believed was not authorized to be in her dormitory building, after which she said she was subject to a small amount of harassment in her dorm building.

Braasch said the altercation with Siyonbola, in which the latter identified her as “the person who called the cops,” convinced her that Siyonbola was one of her harassers. A post-hearing brief pursuant to the freedom of information act request, provided by Braasch to The Fix, said that “the purpose of the encounter” was because Braasch “became concerned that the sleeping person was among those who had been harassing her.”

Braasch’s “unrefuted testimony shows she did not call with the purpose of having Ms. Siyonbola arrested or criminally charged,” the brief says.

Braasch told The Fix that replies from Yale are due later this month and that she expects the university to appeal.

In a Medium essay on Dec. 31, Braasch frankly admitted: “I will never have a career in academia now.” She expressed hope that “the decision of the CT FOIA Commission Hearing Officer will be in my favor, and the world will get to see how the Yale Administration and Police told disgusting lies about me.”

MORE: Thousands clamor for expulsion of student who called police on black classmate