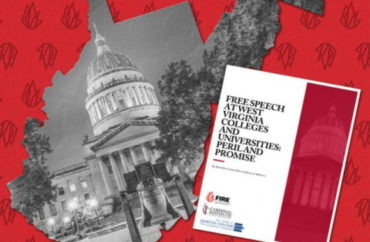 There are nearly 100 policies that restrict free speech in some way at colleges and universities across West Virginia, according to a new report.

“FIRE reviewed the restrictions on free speech at 17 public or private colleges and universities in West Virginia and found 92 policies that restrict freedom of speech,” stated the report, conducted by Foundation for Individual Rights and Expression in partnership with the Cardinal Institute for West Virginia Policy and the Martin Center for Academic Renewal.

Of the 17 colleges reviewed, the three found to most strictly limit free speech were Glenville State College, Concord University and the University of Charleston.

For free speech to flourish on West Virginia's campuses, there is much need for reform. But nearby colleges and universities have demonstrated that this reform is attainable.

Glenville policies forbid, “in any setting,” expressions such as “offensive name-calling, jokes, pictures, objects” as well as “sexually explicit questions, jokes, or anecdotes about gender-specific traits,” the report stated.

The public university also bans “unwelcome or uninvited sexual comments or innuendo,” “sexually suggestive sounds [and] gestures,” and “asking sexual questions, such as questions about someone’s sexual history or their sexual orientation,” it stated.

FIRE argues that Glenville State’s sexual harassment policy, because it prohibits such expression “in any setting,” means that “students reading the policy are left with the unmistakable view that such conduct is prohibited across the board, causing a chilling effect on protected expression.”

Glenville’s media affairs department did not respond to a request for comment.

At the University of Charleston, its ban on cyber-bullying includes “any language that can … potentially result in another student feeling tormented, threatened, harassed, humiliated, embarrassed,” according to the report.

The University of Charleston is a private institution, meaning it has its “own associational right to prioritize other values above free speech.” However, private colleges are bound to their “stated institutional policies regarding freedom of speech,” meaning a legal downfall potentially risks a college’s grant funding, according to the report.

Reached for comment, Charleston’s spokesperson Dave Traube said the institution encourages students “to express healthy, respectful, and stimulating ideas inside and outside the classroom. We are also aware of the mandate we have to keep our community safe and comply with guidelines encouraging responsible communication.”

“As a private institution, the University of Charleston may reasonably regulate the time, place, and manner of expression to ensure the safety and well-being of all of our students, and to not disrupt the ordinary activities of the University for its students, faculty, staff, and community,” Traube added in his email to The College Fix.

West Virginia University maintains a policy that it “expects that persons engaging in expressive activities will demonstrate civility, concern for the safety of persons and property, respect for University activities, respect for those who may disagree with their message, and compliance with University rules and policies, as well as applicable local, state, and federal laws.”

Such a policy is far too vague, FIRE argued, adding it likely prompts students to self-censor in fear that they might be punished.

“If this expectation is merely aspirational, students have no way of knowing, since the expectation appears along with the requirement to obey university rules and laws. … It should never be up to an administrator to decide whether someone has been so uncivil or disrespectful that they deserve an official sanction,” the report stated.

However, this policy was the only one flagged by the report as an infringement on free speech at WVU.

April Kaull, WVU’s executive director of communications, told The College Fix via email that the word “expects” in the policy is exactly that, an expectation but not a requirement.

“It does not violate the First Amendment to encourage individuals to behave civilly while speaking,” Kaull stated. “The West Virginia University system is strongly committed to protecting, upholding and educating others about free speech and the important rights and responsibilities granted by the First Amendment.”

West Virginia Senate Bill 657, which became law in 2021, requires that public colleges protect “any lawful verbal and nonverbal speech,” the report pointed out.