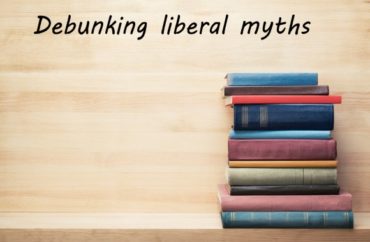 “What does the evidence say about the claims of the Black Lives Matter movement?”

“Is there really a rape epidemic on our college campuses?”

“What was that you were saying about white privilege?”

“What was that you were saying about patriarchal oppression?”

These are some of the study prompts for a new class to be offered at the University of North Carolina Wilmington called “Issues in Criminal Justice.” Were these topics taught by a left-leaning scholar, the classroom conversations and readings might have gone one way.

But the class is the brainchild of one of the most well-known and outspoken Christian conservative scholars in the nation — criminology Professor Mike Adams — and he promises that students will finally get a chance to hear how those on the right would answer these questions, and more.

He calls the class “a reasoned response to systematic academic malpractice.”

“Please note that whereas political leftists author virtually all of the readings in your other courses, conservatives and libertarians author most of the readings in this course,” the syllabus states. “This is done so that you will be exposed to beliefs that contradict those of the vast majority of your professors. Often, these dissenting views are presented only as caricatures. In this class, you will hear from the proponents of such views directly.”

Among the required reading list: Mike Lee’s “Our Lost Constitution: The Willful Subversion of America’s Founding Document”; John Lott Jr.’s “More Guns, Less Crime: Understanding Crime And Gun Control Laws”; K.C. Johnson’s and Stuart Taylor’s “The Campus Rape Frenzy: The Attack On Due Process At America’s Universities”; and Heather Mac Donald’s “The War On Cops: How The Attack On Law And Order Makes Everyone Less Safe.”

One section of the class focused on “the major progressive theories of crime” will tackle “why these theories have been such a failure” and “why academics won’t admit it.” Students will be required to watch the movie “Boyz in the Hood” as part of the discussion.

On the topic of abortion, a screening of the movie “Unplanned” will be offered to students as an optional viewing for a discussion regarding Roe v. Wade.

“What happened to the criminal law when Roe v. Wade was decided – and, perhaps more importantly, what will happen if it is overturned,” the syllabus asks. “We first need to talk about what Roe said and what it did not say. Next, we will talk about the very real prospect that it could be overturned – and who will be subject to criminal liability if that happens.”

Adams, a former Democrat and atheist, will be upfront about his personal religious beliefs to the students in his class. The syllabus alerts students to the fact that he is openly critical of “certain aspects of evolution.”

“Rather than seeing you as the mere product of random mutation, I see you as a unique
individual endowed by his Creator – not just with a right to life, liberty, and the pursuit of
happiness – but also with a purpose. Each one of you has unique and special talents and
along with that a distinct purpose in life that makes you not just unique but irreplaceable,” the syllabus states.

Adams also points out that the course will not only tackle and critique subjects sacrosanct to left-wing scholars, but also treat students like adults. He freely admits in the syllabus his class is “no safe space.”

“If this causes you to encounter viewpoints that bother you or make you feel uncomfortable that is good,” the syllabus states. “There will be no safe space into which you can retreat. Instead, you will be required to take off your intellectual training wheels — something that should have happened for the first time in grade school, rather than in college.”

In a telephone interview with The College Fix, Adams said he hopes Democrats and feminists take the course, not just conservatives. It will be first offered next spring, and in the meantime he said he will plug it this fall on campus and in his current classes.

He said he believes left-leaning students are among those who need the course the most, as it is important to hear the other side of the argument in order to defend one’s own positions.

“You cannot be successful intellectually if you are not prepared to respond to the arguments of the other side,” Adams said.

Adams said he is disappointed in how his colleagues no longer teach both sides of an issue.

“There’s a legitimate question as to whether all my colleagues are just incompetent or whether it’s just that they have a moral compass that points to them,” Adams told The Fix. “I’m really trying to figure out if they’re intellectually herniated or just morally herniated. But in all likelihood it’s improper to attribute it to one or the other. It’s got to be a combination because the situation has just gotten so bad. I just have to teach a course like this one.”

Adams made national headlines in 2014 when he won a seven-year court battle against the University of North Carolina Wilmington for retaliating against him for his conservative, Christian views. As part of the settlement, campus leaders agreed to adopt procedures protecting Adams from renewed retaliation.

Adams told The Fix that in light of his past experiences, he is not worried about his academic freedom or the pushback this class might receive from some corners of campus. In fact, he added, controversy is one sign of robust intellectual diversity.

“I’m worried if I don’t cause controversy,” he said. “I’m extremely worried about that. A lack of controversy on college campuses is a sign of sickness and intellectual atrophy.”