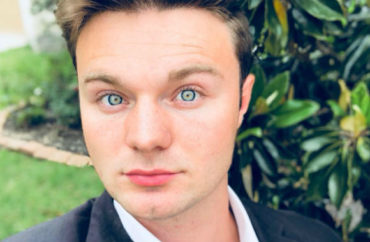 An alleged campaign of harassment against a student for his pro-gun views may drive him to leave the school – and possibly sue it.

Quade Lancaster told The College Fix that ever since he accused Lone Star College-Tomball of violating its own procedures to remove him as student body president, he has been shadowed by campus police, his car has been keyed and he was followed by an unknown driver.

The Texas community college’s behavior has also been petty, the 24-year-old claims: It rescinded an academic award without telling him, publicly embarrassing him in front of his family at the award ceremony.

Lancaster believes he has been targeted because his conservative viewpoints don’t align with the community college’s, and he thinks the same thing is happening to conservative students at other Lone Star campuses, though he didn’t provide examples.

“When I first came to this campus, it felt like home, but now it feels like prison,” Lancaster said in a phone interview.

The viewpoint discrimination allegations against the community college system follow its $13,250 settlement with the Young Conservatives of Texas last month for improperly derecognizing the club at its CyFair campus.

The Tomball campus told The Fix to contact Jed Young, interim associate vice chancellor of communications and marketing for the college system. He did not respond to emails and a phone call last week.

A ‘bullshit’ reason for removal

The escalating series of events wasn’t what Lancaster expected when he walked into a student government meeting in early March, where a conversation about guns was taking place.

Lancaster said his colleagues asked him for his views in the wake of the Stoneman Douglas High School shooting that killed 17 people.

He responded by advocating for Second Amendment rights, leading a critical colleague to escalate the conversation. It got so heated that Lancaster decided to leave the room, he told The Fix. The next day the longtime program manager for the Office of Student Life, Shannon Marino (left), asked to talk to Lancaster about his pro-gun comments. In the talk, Lancaster claims Marino told him he was being demoted from president to vice president because “my views did not conform to Lone Star’s views. … I was told as the student president I was not allowed to have an opinion or express my viewpoints.”

He claims Lone Star removed him from office without due process, specifically by not following the procedures laid out in Article VI of its Student Government Association By-Laws.

The removal procedures specify that the Office of Student Life must write and mail a letter to the Executive Council member, providing the reasons for why the person is being asked to resign. Next, the dean of enrollment management and other Executive Council members must meet with the member targeted for removal, where that person answers questions about the situation. The school makes a decision three days after the meeting, and the targeted member can appeal the decision to a higher official.

The only stated cause for removal is failure to “fulfill his or her obligations” or “maintain enrollment as a student.” Lancaster said the reason Marino gave him for removal from his position was his use of profanity. He used “bullshit” in the heated argument about gun rights.

Marino did not respond to Fix emails last week.

Revoked award was a ‘signage error’

According to an invitation that Lancaster shared with Campus Reform, he was set to receive the award at an April 26 ceremony, which took place after he was demoted from his student president position.

“A member of the faculty or staff has chosen you to receive an award for Excellence in Academics and/or Leadership!” the invitation reads. “Award recipients are encouraged to bring family and friends to the awards ceremony.” It concludes by telling recipients to “Dress in Sunday Best!” The invitation directs them to contact Marino for “more information.”

Lancaster told The Fix he went to the award ceremony, but his name was no longer under the student nomination list. He later found out the school revoked his award, claiming that he was not supposed to receive an award and it was a “signage error,” according to Lancaster.

“I went to the ceremony thinking I was going to receive the award,” Lancaster said. “I was completely embarrassed. My entire family was there.”

He claims this was retaliation for the negative attention the school received after the media covered his situation. Prof. Ocana did not respond to emails from The Fix last week.

Stalked as he drove home, shadowed by campus police

As Lancaster brought media attention to Lone Star for its reaction to his gun argument, things got even worse for him.

Not only did someone key his vehicle (below), but Lancaster alleged that campus police officers shadowed him and his friends while they were on campus in order to pressure and intimidate them. 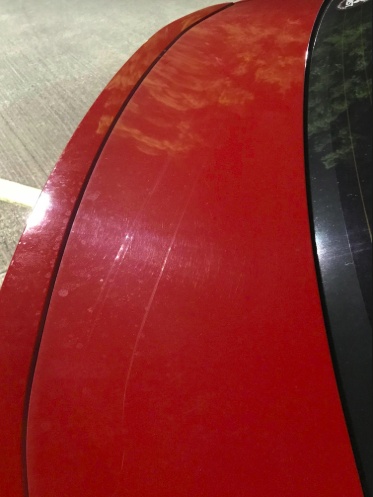 He said Lone Star administrators gave him and his friends dirty looks several times, as well.

The scariest incident of all happened to Lancaster after Campus Reform highlighted his revoked award, he said: A white Mercedes car with a Lone Star sticker on it followed him while driving.

“This person followed me down every turn and neighborhood,” apparently trying to learn where he lived, “and I didn’t know where I was going,” Lancaster said.

The pressure from all of this has taken toll on Lancaster. In a May 11 Facebook post, he posted a personal prayer asking God for strength.

“My knees are beginning to buckle from this pressure,” which include “threats” made against him, Lancaster wrote (below): “My school has made me a pariah for speaking out against their illegal activities and liberal bias and I have an entire collegiate administration bearing down on top of my head.”

Lancaster said he doesn’t know how much longer he will be at Lone Star, which he believes is looking for a way to remove him from student government entirely. His chances of being re-elected next spring are slim if he manages to hang on.

Lone Star’s administration has tried to meet up with the conservative student, but he has declined the invitation, believing that nothing will actually come of it. Lancaster said he has not decided if he will pursue legal action against the college. 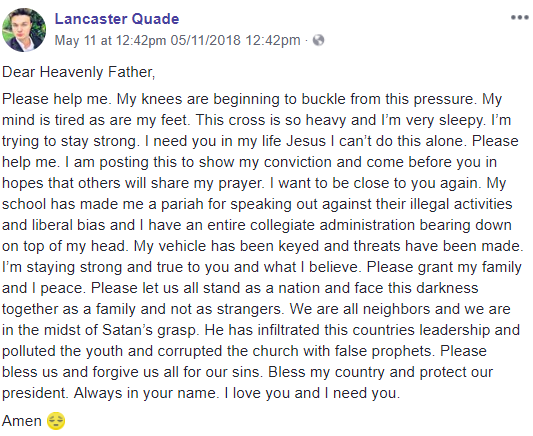