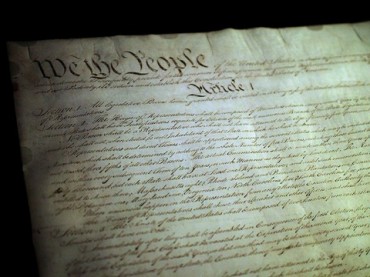 Say one thing for millennials, say they appreciate the liberty this country affords them.

They were among those most outraged to learn that their government is spying on them, collecting data on their every Internet move – in violation of the Fourth Amendment. Surveys show many are also passionate for free speech rights, and adverse to big government intrusion and control.

And today, on Constitution Day, liberty-loving college students will remind their peers in a variety of ways on campuses across the nation what it means to live in a free country.

Some 211 campus Young Americans for Liberty chapters will mark the group’s “Constitution Week” observances, parking their “Free Speech Walls” and giant copies of the Constitution in the center of their respective quads. They’ll host free-speech forums, collect signatures against the NSA, and hand out copies of the constitution, among other efforts.

According to YAL officials, here’s what else is brewing on campuses this week:

Eastern Kentucky University is planning a “dorm storm” with over 2,000 Constitutions.

New Mexico State University will host Congressman Steve Pearce for a day at the gun range.

Marshall University will build a giant “Free Speech Wall” to celebrate their freedom of speech and engage their peers on the First Amendment.

California State University-DH will partner with the American Civil Liberties Union to host a free speech forum on campus.

Elizabethtown College will “take liberals to the gun range” and provide them with a free gun safety class and free shooting at the range to educate their liberal peers on the Second Amendment.

University of Nevada-Las Vegas will raffle off a pistol among all their new sign-ups to raise awareness about the Second Amendment.

The University of Kentucky is handing out the two most American things possible…free apple pie and Constitutions!

Shorter University will wear empty holsters to class all week as a protest of limitations on our Second Amendment rights.

“We the People of the United States, in Order to form a more perfect Union, establish Justice, insure domestic Tranquility, provide for the common defense, promote the general Welfare, and secure the Blessings of Liberty to ourselves and our Posterity, do ordain and establish this Constitution for the United States of America.”

We the people created this Republic, and it’s we the people who must keep it. A wise man once said:

“Freedom is never more than one generation away from extinction. … The only way they can inherit the freedom we have known is if we fight for it, protect it, defend it and then hand it to them with the well thought lessons of how they in their lifetime must do the same.”

Here’s to the Young Americans for Liberty, who are doing their part to defend their cherished freedoms and fight for liberty.