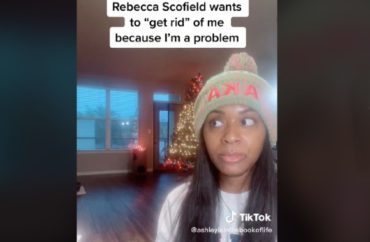 A University of Idaho history professor filed a federal defamation lawsuit against a TikTok psychic who claimed to have received information through tarot cards that the scholar was responsible for four murders.

Professor Rebecca Scofield filed the federal lawsuit on December 21 after multiple cease and desist letters were sent and ignored by Ashley Guillard.

Guillard (pictured) posts videos on social media website TikTok where she claims to solve murders using tarot cards and other psychic methods. Her videos have racked up millions of views, according to the lawsuit. She calls herself a “clairvoyant” and is “blessed with the ability to access and interpret information from the universal consciousness,” according to her website.

She accused Scofield of hiring someone to murder four students in November 2022 at the University of Idaho to cover up a romantic relationship with one of the victims.

Scofield has “never met any of the victims,” the federal lawsuit stated.

“Guillard’s videos have been viewed millions of times, amplifying Guillard’s online persona at the expense of Professor Scofield’s reputation,” the professor’s attorneys wrote. The TikToker accused Scofield of hiring Jack DuCoeur, the ex-boyfriend of one of the victims, to commit the murders. Police have already ruled out DuCoeur as a suspect, according to the New York Post.

Even after receiving two cease and desist letters, Guillard continued to make videos accusing Scofield of the murder, according to the lawsuit.

Guillard has continued to post about the situation and stands by her assertions.

“I’m actually gleaming with excitement,” she posted three days ago in a video about the news of the lawsuit. The TikToker said she is excited to present her “ideas in court” about Scofield.