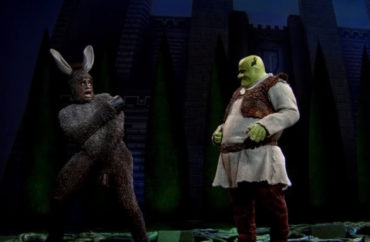 In early March, performers at the University of Kentucky’s Briggs Theater were in rehearsals for “Shrek: The Musical,” billed by the university as “a joy for the young and the young at heart.”

On this day, some of the performers were discussing a line that other theaters had pulled from the Tony Award-winning play. In the original song “Story of My Life,” the Big Bad Wolf sings, “they tore my cotton granny dress / and called me a hot ’n’ tranny mess.”

While the line referencing “trannies” had been removed from the Kentucky performance, some of the songbooks had not yet been updated, forcing the performers to see the word in print.

Further, one of the show’s producers allegedly remarked to a performer that it was a shame other theaters had seen fit to remove the line because it was “so funny in the musical.”

The producer said he understood why the line had to be cut, due to “changing times,” but then allegedly said, “If you are upset by the line ‘tranny mess,’ I’m sorry.”

The producer was then reported to the University of Kentucky’s Bias Incident Response Team by an offended student performer.

“It felt very out of place, inappropriate, and unnecessary to state any of this, let alone actually verbally saying this slur,” the performer wrote. “It made me very uncomfortable.”

This report is one of 74 filed with the bias response team during the 2018-19 school year. The reports were obtained by The College Fix through a public records act request. The names of the parties were redacted by the university to protect their identities.

According to the university’s website, campus community members are encouraged to report “bias” incidents, which the school defines as “Any activity that intimidates, demeans, mocks, degrades, marginalizes, or threatens individuals or groups” based on a number of factors.

“A bias incident can occur whether the act was intentional or unintentional,” reads the university’s website, “and may or may not be a legal act.”

“In identifying a bias incident, the focus is on the impact on an individual or group, not the intention or motivation of the actor.”

In many cases, complaints were made against professors by students accusing them of racial bias.

In December 2018, a student received a class art project back from a professor on which the professor had drawn some words of encouragement, such as “you have made me smile.”

But the professor also included an elaborate drawing of a smiley face that the student thought looked like a monkey. The student reported the professor, charging her with drawing an “insulting racial picture.” (The race of the student is not known based on the complaint.)

The student also notes he or she received a failing grade in the class for missing too many sessions. “My grade was not my main concern,” they wrote, saying “it was the racial image that was drawn in my book.”

In January of this year, a professor was reported for teaching a class in which she stated darker-skinned people tended to live closer to the equator.

“Her delivery of this information seemed very insensitive” and “her definition of racism and institutional racism were not accurate,” according to a student in the class.

“She also stated racism can happen to anybody,” the student wrote, adding, “I was confused at first and then I started to doubt whether or not I should be offended.”

But these doubts were evidently confirmed when the professor referred to Barack Obama’s father as a “dark-skinned black” and his mother was a “Caucasian white woman.”

Also in January, a health sciences professor was asking her class whether students minded being late to things. Nobody raised their hand. The professor then allegedly looked at the only African-American female student in the class and said, “Even you like to be on time?”

In February, a pharmacy professor was reported for a class presentation in which his slides referred to “blacks” or “the blacks.” The student making the complaint instead preferred terms like “black patients” or “black people.”

In response to the slide show, four other faculty members in the department addressed the class, apologizing for the professor’s arcane language. One faculty member was “brought to tears” at the idea of her students being offended at something over which she had no control.

After the class, the professor that gave the slide presentation allegedly approached a black student and said something similar to, “so are you millennials just so offended that you wouldn’t take my generation’s feelings into account? Glad you accomplished your goal of making a teacher cry.”

According to the complaint, the professor had only recently removed the word “negro” from his slides.

In March, a student reported a professor for a questionnaire she assigned, hoping to get to know students better.

The professor “presented a slide where she self-identifies herself as a ‘cat lady,’ but she really likes all animals,” a student complained.

“She asked us to do the same exercise in which we name our identities and the identities people project on to us,” the student wrote, adding, “I feel uncomfortable and singled out with this exercise as she is trying to equate the oppression that Black people experience to the oppression of someone who identifies as a ‘cat lady.’”

The student also complained the professor “fetishized Hispanic culture” by saying she “likes their culture and thinks it’s cool.”

In April, an instructor showed the class a photo of the Starbucks corporate board and noted everyone on the board was white except for one light-skinned black man who she called “barely black.”

“This comment was highly offensive considering I am a light skinned Black man myself,” the student reported.

The university did not respond to a request for comment on how it handles the complaints, as its website only vaguely states administrators take “appropriate action” in response.

The Bias Incident Response Team “will allow the University to respond to individual incidents and to examine trends and themes that need to be addressed,” according to the website.

· A GroupMe chat for minority pre-medical students was crashed by trolls identifying themselves by the names “Jack Nuts” and “Chode Rodgers,” with Jack Nuts saying he was “down for some human anatomy” and Chode Rodgers asking if anyone wanted to “touch butt holes together.”

“It’s a damn shame how every time black people/minorities try to have safe spaces, white trolls come and take over,” said one of the group’s students, “Jamie T.”

· During a trip to Washington, D.C., campus Rabbi Shlomo Litvin stopped outside the office of U.S. Rep. Ilhan Omar and snapped a photo outside her door. Litvin then posted the photo on Facebook with the caption “A quick stop at the Hamas regional office. #StandUpToBigots #AntiZionismIsAntisemitism #CallThemOut” 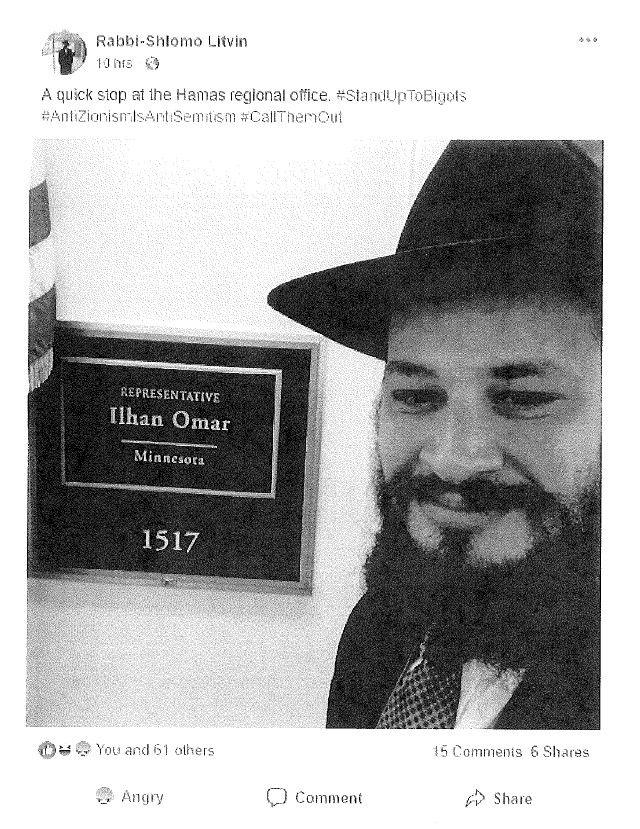 “This is a blatant form of racism and it makes me ashamed the university has not taken action,” a student reported.

Litvin did not respond to a request for comment.

· In August 2018, a husband and wife passed a house that had a bedsheet displayed with the words “Freshman Daughter Drop-Off.”

· A man was reported for wearing a T-shirt on campus that said “Trump That Bitch.”

· A worker at a campus office reported a co-worker for printing opinion pieces on the copier in the office. One day, the complainant found an op-ed entitled “Why Liberals are Bigots” on the printer.

“I feel incredibly offended by that statement and I think this should not have to happen at work,” the report states. The worker also remembers seeing an opinion piece arguing people should stop donating to universities that have diversity as a goal in their mission statements.

· A student leaned in to a dorm residential advisor and whispered, “My new roommate is a fag.” The advisor asked him what the problem with having a gay roommate was, and the student said, “I just don’t want to live with him.”

The RA then reported the student to administrative staff.

· A female dorm resident was reported after she was overheard saying “I’m going to have to beat up a white bitch.”

· A student was catcalled while she waited in line for pizza.

· A professor showed a clip (below) from the show South Park that uses the word “retard” numerous times.

· A white student in Jewell Hall was overheard in his dorm room using the “n-word” on the phone by another student out in the hall.

· A wheelchair-bound student felt bullied by her four roommates because they thought the food she made one night smelled terrible. According to a text sent by one roommate, “no one should make such foul-smelling food with no warning or attempt to get rid of the smell.”

The wheelchair-bound student said she was unable to take out the trash because in her wheelchair, she cannot reach the dumpster.

The report was filed by a friend of the wheelchair-bound student who said she worried for her friend’s mental state. The student offered to provide secret audio recordings she had made of the roommates.

· A University of Kentucky police officer was called to check up on a nonbinary student having mental health issues, and referred to the student with “she/him” pronouns rather than their preferred “they/them.”

In a separate incident, a police officer was called for a wellness check on a student reported to be suicidal. The officer entered the room and said “I’m here for the depressed kid.”

In May 2018, the University of Kentucky was bestowed the Foundation for Individual Rights in Education’s ignominious “Speech Code of the Month” award.

“The University of Kentucky’s policy highlights the threats to free speech and freedom of conscience,” said FIRE.