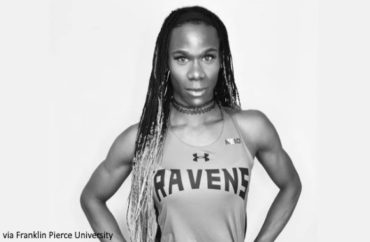 A student-athlete at Franklin Pierce University on Saturday became the first in the school’s history to collect an individual national title. That student-athlete is also transgender.

“A transgender woman who competed as a man as recently as last year won an NCAA women’s track national championship on Saturday. Franklin Pierce University senior Cece Telfer beat the eight-woman field in the Division II women’s 400-meter hurdles by more than a second, with a personal collegiate-best time of 57.53,” the Tribune-Review reports.

“As recently as January 2018, Telfer had been competing as an athlete for Franklin Pierce men’s team as Craig. Telfer finished eighth in a field of nine in the Men’s 400 meters at the Middlebury Winter Classic in Vermont,” the Trib reported. “The NCAA allows male athletes to compete as women if they suppress their testosterone levels for a full calendar year. Before that, they compete on mixed teams — with men and women — in the men’s division but not the women’s.”

In just its 7th year of existence, the @FPURavensXCTF has its first national champion. Senior CeCe Telfer took control of the 400-meter hurdles on Sat. PM and went on to post victory w/ a personal best time of 57.53. Read more here; https://t.co/vCukMSb7vS pic.twitter.com/gE3v7HQ3Ml

In just its seventh year of existence, the Franklin Pierce University women’s track & field team has its first national champion. Senior CeCe Telfer (Lebanon, N.H.) took control of the 400-meter hurdles down the back stretch on Saturday night and went on to post victory by more than a second, in a personal collegiate-best time of 57.53 seconds. Telfer also added All-America First Team accolades in the 100-meter hurdles earlier in the day, on the third and final day of the NCAA Championships, hosted by Texas A&M-Kingsville, at Javelina Stadium.

Telfer is the first student-athlete in Franklin Pierce history to collect an individual national title. It marks the seventh NCAA national championship overall in the history of the University, with all the previous crowns coming on the soccer field. …

Earlier in the day, Telfer also earned All-America First Team honors in the 100-meter hurdles, with a fifth-place finish. Running out of lane 7, she crossed the line at 13.56 seconds, just one half-second behind the winner. Pittsburg State senior Courtney Nelson, who had been the top qualifier out of Friday’s preliminary heats, took home the national title in 13.06 seconds. San Francisco State junior Monisha Lewis followed in second (13.29), while Minnesota-Duluth senior Danielle Kohlwey took third (13.31). Lindenwood senior Erin Hodge narrowly edged Telfer at the line for fourth place, with a time of 13.47 seconds.

Read the university’s press release and the Trib article.