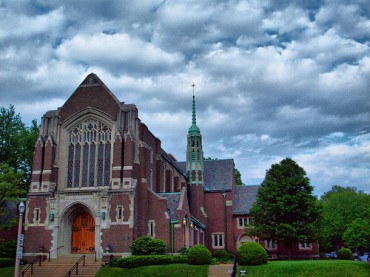 At the event, sex educators talked to students about how to touch themselves and their partners to reach orgasm.

Graham Chapel, which looks like a cathedral with tall ceilings and a looming pipe organ, is not actively used for church services, but rather weddings, concerts and plays, as well as the university’s weekly lecture series.

Nevertheless, the building’s Christian roots can be found among its large and impressive stained glass windows, which depict the dedication of King Solomon’s temple. Below the window reads an inscription that comes from 1 Kings: “The Lord God be with us, as He was with our fathers, that He may incline our hearts into him, to walk in all his ways and to keep His commandments.”

As for Ford Memorial Chapel at Allegheny College, in addition to academic lectures and other campus events, it hosts an Ecumenical chapel service every Sunday morning and a Roman Catholic Mass on Sunday evenings. Other worship events include periodic praise and worship services and Lenten services.

The sandstone chapel seats 600, and boasts a pipe organ and Gothic stained glass windows. Weddings are often hosted there as well.

For Catholics who attend services at Allegheny College’s Ford Memorial Chapel, the alter is considered a sacred area where they believe the Eucharist transforms into the presence of Jesus Christ during Mass.

What’s more, many Christians of all stripes believe it’s important to offer some measure of reverence to a building that hosts worship services, based on the following passage in the book of John:

“When it was almost time for the Jewish Passover, Jesus went up to Jerusalem.  In the temple courts he found people selling cattle, sheep and doves, and others sitting at tables exchanging money.  So he made a whip out of cords, and drove all from the temple courts, both sheep and cattle; he scattered the coins of the money changers and overturned their tables. To those who sold doves he said, “Get these out of here! Stop turning my Father’s house into a market!”  His disciples remembered that it is written: “Zeal for your house will consume me.”

Some Biblical scholars have argued it must have taken Jesus a good ten minutes or more to fashion the whip he used to drive out the moneylenders. His act was not some gut reaction to the scene, but borne of deliberate thought and righteous anger.

It’s easy to recall this scene from the Bible when reading that at Allegheny College’s sex seminar, organizers sold orgasm-themed hats, T-shirts and books inside the church after the lesson ended.

This troubling trend highlights another aspect of the ongoing war on Jesus and Christianity at colleges across the nation that The College Fix has documented.

Other recent examples include a trend in which liberal seminary professors claim Jesus was bisexual. Click here to read about that.

What’s more, a recent look at hundreds of religious studies classes at universities across the nation uncovered that, for the most part, professors prefer to snub the subject of who Jesus was and what he preached. Classes that are focused on Christianity, meanwhile, tip-toe around or altogether avoid the topic of Christ’s teachings. Click here to read about that.