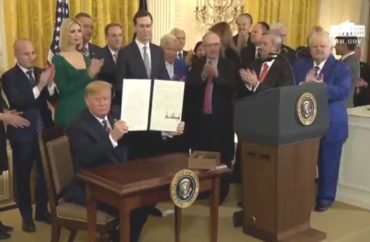 ‘My administration will never tolerate the suppression, persecution or silencing of the Jewish people’

President Donald Trump on Wednesday signed an executive order that aims to fight anti-Semitism — particularly on college campuses — by clarifying that federal laws protect against discrimination against Jewish people and warning public institutions could lose funding if they ignore “the vile, hate-filled poison of anti-Semitism.”

“This action makes clear that Title VI of the Civil Rights Act, which prohibits the federal funding of universities and other institutions that engage in discrimination, applies to institutions that traffic in anti-Semitic hate,” Trump said in a ceremony right before signing the order.

“This is our message to universities,” Trump said. “If you want to accept the tremendous amount of federal dollars that you get every year, you must reject anti-Semitism. It’s very simple.”

According to the White House, the order also directs federal agencies “to identify other ways the government can use nondiscrimination authorities to address anti-Semitism.” And it tells federal agencies to consider the International Holocaust Remembrance Alliance’s definition of anti-Semitism during enforcement.

“The Remembrance Alliance definition makes clear what our administration has stated publicly and on the record: Anti-Zionism is anti-Semitism. The inclusion of this language with contemporary examples gives critical guidance to agencies enforcing Title VI provisions,” writes Jared Kushner, the president’s son-in-law and one of his senior advisers, in an op-ed in The New York Times.

“With Wednesday’s executive order, the president takes crucial action to support and defend Jewish students in the United States,” Kushner added. “For the first time, a president is making clear that Title VI of the Civil Rights Act’s prohibition against discrimination based on race, color or national origin covers discrimination against Jews.”

The White House, in a statement, said it is responding to a rise in anti-Semitic incidents since 2013, especially in schools and on college campuses.

According to an “anti-Semitism tracker” database maintained by the AMCHA Initiative, there have been 3,084 incidents of anti-Semitic activity on college and university campuses since 2015.

“My administration will never tolerate the suppression, persecution or silencing of the Jewish people,” Trump said during the ceremony. “We have also taken a firm stance against the so-called divestment and sanctions movement, or BDS.”

Harvard University law professor Alan Dershowitz also spoke during the event, saying “for 65 of my 81 years I have spent at universities … there is no more important event in those 65 years to turn universities away from being bastions of hatred and discrimination than this executive order being signed today. It is a game changer.”

Even prior to the order’s signing it seems to have been having an effect. Recently the University of North Carolina at Chapel Hill pledged to expand protections for its Jewish students to resolve a civil rights probe by the U.S. Education Department looking into complaints of campus anti-Semitism.

While the order is being hailed by Jewish rights groups, not everyone’s on board.

The American Association of University Professors tweeted in response that it’s “shameful this is being done in the name of protecting higher education. This helps no one, not the faculty, not the students, not the institutions, not higher education, and not academic freedom.”

And a statement put out by the Foundation for Individual Rights in Education noted the order “is couched in language intended to paper over the readily evident threat to expressive rights, its ambiguous directive and fundamental reliance on the IHRA definition and its examples will cause institutions to investigate and censor protected speech on their campuses.”