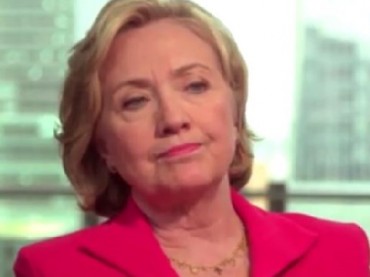 Nonprofit expert: ‘You would have to take her at her word’

Hillary Clinton says she donated her estimated $2 million dollars earned from campuses speeches over the last 18 months to her family’s nonprofit Clinton Foundation – but that assertion cannot be independently verified, according to a nonprofit foundation expert.

Rick Cohen, national correspondent for Nonprofit Quarterly, said the only way to confirm Hillary Clinton donated her campus speaking fees to her foundation would be for her to release her personal income tax returns to the public, or for her to direct her foundation to release its IRS tax filings to the public with specific identification of the names of its major donors and the amounts they donated.

Those two disclosures are not required by law.

Cohen said he isn’t confident that the foundation would make such detailed disclosures, based on the minimal amount of donor information it currently lists on its 990s.

As for Clinton, after she becomes a formal candidate for president, she will have to file financial disclosure forms with the Federal Election Commission, which do not require her to itemize charitable contributions.

“The financial disclosure statement is going to leave you maybe wondering,” Cohen said in an interview with The College Fix. “Basically it will identify the sources of her income, identify the organizations she associated with, but it may not say: ‘Here is where I gave my donations to.’ And in fact, I’m pretty sure it won’t.”

That leaves the public with no option to independently verify her statement until and unless she releases her complete income tax returns. “All of the fees have been donated to the Clinton Foundation for it to continue its life-changing and life-saving work. So it goes from a foundation at a university to another foundation,” Clinton told ABC News in early July, after outrage ensued regarding the high-dollar amount she commands for campus appearances.

‘You would have to take her at her word’

Disclosing her finances on paper has never been her strong suit, Cohen said.

For example, when the Clintons raised money for their library foundation, the William J. Clinton Presidential Library, she chose not to divulge donations to the foundation during her 2008 presidential campaign, he said.

The contract between Hillary Clinton and UCLA for her March 5 appearance, for which she was paid $300,000, directs the university to cut the check to the Harry Walker Agency, which will then remit the honorarium to the foundation, according to a copy of the contract obtained by The College Fix.

An interview request to the Clinton Foundation on the subject by The College Fix was referred to her personal office, which did not respond to an email seeking comment.

Cohen, who has covered nonprofit foundation operations for more than a decade, said that annual tax documents filed by the Bill, Hillary, and Chelsea Clinton Foundation, called 990s, do not list Hillary Clinton as drawing a salary from the organization. (Nor Bill Clinton, for that matter).

“The real question on the 990s is if she says she is donating the money to the foundation, how would you know,” Cohen said. “The foundation, as a 501(c)(3) public charity, does not have to disclose who gives it money, and how much.”

What’s more, up until about four or five years ago, the Clinton foundation had “a very odd process, its 990s would list major donations without an address or name of the donors,” Cohen said.

“A few years ago, they stopped even doing that,” he added. “They’re under no obligation to do so by law, because they are an operating public charity.”

Making matters worse, the lagtime in when 990s are filed – and when they are made available to the public – makes tracking such matters difficult. Even with the information that could be culled from the foundation’s 990s for 2013-14, those reports might not be published for public review until 2016, Cohen said.

Meanwhile, Clinton won’t be filing a candidate’s financial disclosure statement until she is an official candidate, which is still some time off.  If as a candidate she releases her income tax filings, that won’t be soon either.

In her 2008 presidential primary campaign, she didn’t release her income tax filings until April 2008, a month after Barack Obama did.

Cohen said one of his biggest concerns with the fact that Hillary Clinton can collect $300,000 for the UCLA campus speech is that it’s sort of a work-around of campaign finance laws, not from Clinton’s end – but from a donor perspective.

Clinton’s visit was funded by the Luskin Lecture for Thought Leadership, a UCLA endowment created by wealthy businessman Gene Luskin, who has a history of supporting Democrats, such as President Obama, according to Federal Election Commission records.

Launched in 2011, to date the series has funded three guest lectures: one from former President Bill Clinton in 2012, which cost $250,000; another by former United Nations Secretary-General Kofi Annan in 2013 at a cost of $180,000; and most recently by Hillary Clinton.

“Luskin can basically pay for the speech, and he and a bunch of his friends get to spend time with Hillary,” Cohen said. “There is nothing more valuable in politics. Not only is it face time, it’s a charitable tax deduction.”

And that’s troublesome, he added. Charitable expenditures for politicians’ charities raise the potential of donors using charity for political influence.

“Even though it’s for ‘charity,’ it’s not really Luskin’s charity to the extent that it is a 501(c)(3)charity and a tax deduction,” Cohen said. “That money could have gone to other speakers of equal educational benefits. So when it’s tax deductible charitable money, as opposed to a private operation’s money, it’s partly your tax money.”

Both Sides Do It

Cohen said this set-up, which is legal, is not exclusive to Democrats.

“I have been raising this issue since 2004,” he said. “Right-wing groups do the same thing as left-wings groups. It’s the way the game is played.”

For example, he cited former House Majority Leader Tom Delay’s foundation for foster children, which came under fire in 2005 for its support from large corporations.

“I am sure there are people who gave to Tom Delay because they care about foster children,” Cohen said. “The problem is for a sitting politician to have a charity associated with that politician. Lobbyists and influence peddlers can use donations to the charity as a means of signaling support and getting access to powerful political leaders without those interactions being disclosed and scrutinized”

An effort several years ago to force charities associated with sitting politicians to detail more information about their donors did not pass Congress, he said. But with Hillary Clinton, it wouldn’t matter, anyway.

“She is not yet an official political candidate, she does not hold office,” he said. “This is where charity gets really mucky.”