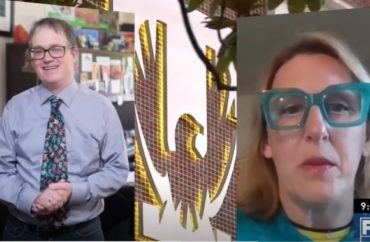 Puts him on their ‘list’ because TPUSA has a Professor Watchlist

The creation of a list of professors who push an agenda is wrong — but only when conservatives do it apparently.

“Professor Donadio and Turning Point USA, you are on our list,” the flyer said. A photo of it in a video from Fox 17 can be seen below. 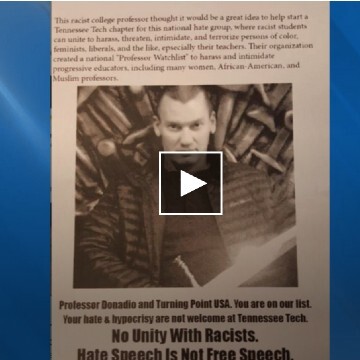 “I feel it’s my responsibility and it should be a professional standard to stand-up to someone who practices racism,” Gruber told Fox 17. Gruber is German professor at Tennessee Tech.

The pair appeared to have targeted Donadio and TPUSA for its Professor Watchlist, which lists professors who have exhibited a liberal bias or questionable beliefs in their comments or the classrooms.

Gruber made the flyers to imitate the watchlist, according to Inside Higher Ed. She worked with Smith, an English and religious studies professor, to circulate them.

The education publication also said that the animosity stems from a dispute about a local school’s Redskins mascot.

The Putnam County School Board rejected demands to change the mascot.

Donadio, who is a Putnam County commissioner, supported the decision, while Gruber wanted the name changed.

The Professor Watchlist includes a Northwestern University professor who has denied the Holocaust and another one who appeared sympathetic to the terrorists who attacked a French newspaper over a cartoon considered offensive to Muslims.

Smith and Gruber were found guilty of violating university policies, according to The Oracle, the campus paper of the public university.

A punishment has not yet been announced and legal challenges are expected, as the pair of professors has retained an attorney.