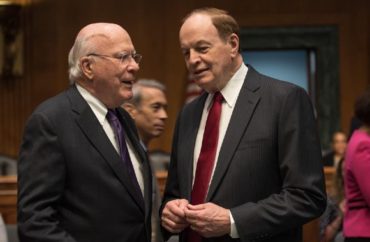 Taxpayers will send a total of $80 million to two universities that will host the archives of soon-to-be former U.S. senators, thanks to earmarks inserted into the $1.7 trillion omnibus spending bill.

In the U.S. Senate, Patrick Leahy (D-VT) and Richard Shelby (R-AL) were the Chairman and Ranking Member on the Appropriations Committee. Both of them retired at the end of the session– but not before Shelby earmarked $50 million for the University of Alabama, his alma mater and the site of his announced Senate archive. Leahy, too, earmarked $30 million for the University of Vermont – also the site of his Senate archive.

“Last year, Shelby announced that upon his departure from Washington he planned to donate his official Senate papers, records and materials to the university,” Roll Call reported. The political insider publication reported that Shelby’s media team said it is up to the University of Alabama to decide what to call the new institute created with the earmark funding.

“Shelby spokeswoman Blair Taylor said it isn’t unusual for the final versions of spending bills to contain earmarks that weren’t in the initial versions,” Roll Call reported. “She added that whatever name the university bestows on the new institute, whether it includes ‘Shelby’ or otherwise, will be up to the university.”

The University of Vermont has already named a research vessel after Senator Leahy’s wife, according to an October announcement from the school. Marcelle Leahy has been on the board of advisors for the nursing school at UVM for more than two decades.

Editor’s note: The article has been amended.

MORE: Public university will spend $100K on what name to use