Earlier this month, students at the University of Arizona were treated to a bleeding vagina near the Second Street Garage.

Sort of. Actually, it was an art project by UA fine arts major Diana Marie who said she wanted to create a “conversation about menstruation” — such as the “casualness of bleeding,” The Daily Wildcat reports.

Titled “Time of the Month,” Marie’s piece (below), remained up during a full week (October 4) to signify “the average time a person spends menstruating.”

On her Instagram page, Marie describes the piece thusly:

I have placed this project in a public space to simulate the fact that it is very possible at least one person who passed by another on any day was menstruating. I wanted to make this an extremely obvious sight since I believe that people seem to overlook the casualness in how nearly half the population is bleeding at any given moment. 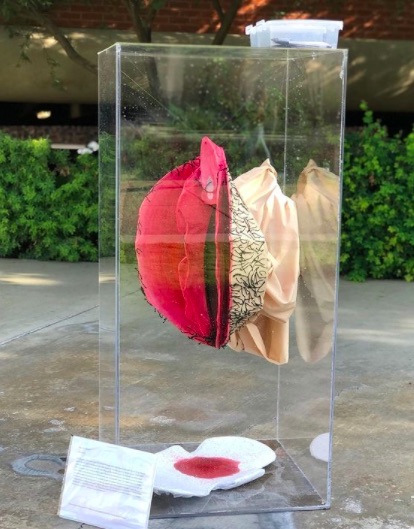 According to Marie, The purpose of her sculpture was to reveal and diminish the stigma of menstruation and female sexuality. Marie believes there is never a reason to hide it, “but one thing you should never feel is ashamed about it.”

With her art, Marie wanted to remind people that menstruation is natural. During menstruation, people can experience severe pain, cramping, bleeding and mental issues due to hormonal balances.

Marie recognized her privilege in the ability to not only be someone with resources for menstruation but also an artist who can speak freely on the topic. “I think it speaks for the women that can’t speak and should be able to speak about their own bodies,” said Marie explaining about communities where menstruation remains a highly taboo and sacred topic.

Marie’s next “outlandish project” will be on October 24 when, for the entire day, she’ll wear a dress “resembl[ing] the nature surrounding her.” Her complete and utter silence for the 24-hour span will signify “the serenity of the landscape.”