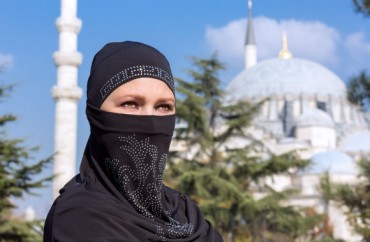 This past Wednesday, the University of Michigan student paper featured an article which compares contemporary anti-Muslim/Muslim-American sentiment to the internment of Japanese-Americans during World War II.

Colin Beresford’s piece in The Daily Michigan begins ominously enough, with President Franklin Roosevelt’s notorious Executive Order 9066 which gave the green light to the internment. The order “was met with nearly no opposition by the non-Japanese-American population,” he adds.

Fast forward to 2016 where then-presidential candidate Donald Trump discussed a possible “Muslim registry” and sought a ban on travel from several Muslim-majority countries.

“You sometimes feel as if you don’t belong because of certain policies, certain wars and especially this year with the Muslim registry. I have definitely felt as if I’ve questioned, ‘Am I really American?’” University of Michigan senior Haleemah Aqel said. “We kind of all just feel sometimes as if we don’t belong.”

Aqel, who is the campus Islamophobia Working Group student coordinator, did concede, however, that despite “experienc[ing] forms of discrimination [similar] to that of Japanese-Americans during World War II,” the severity of the discrimination is “on different levels.”

Matthew Stiffler, a researcher at the Arab American National Museum and lecturer at the University of Michigan, noticed the alliance form in the early ’90s, long before the announcement of the immigration ban from the majority-Muslim countries.

Stiffler added the support for the Arab and Muslim American communities started with a Japanese-American congressman. …

LSA junior Maureen O’Bryan, the co-event chair for the Japanese Student Association, wrote in an email interview that connecting Japanese discrimination to the discrimination of Arab and Muslim Americans today puts their reality in context.

“It’s powerful because Japanese-Americans have (experienced) this and we say never again should this happen,” O’Bryan wrote. “I think if the Trump administration really wants to use Japanese incarceration as precedent for his Muslim ban, he’s going to see a strengthening alliance between these two groups because we’re not going to let what happened to us be used against another minority group that is a supposed ‘threat’ to national security because it was found that Japanese-Americans did not pose any threat to the U.S. during WWII.”

The US Supreme Court recently sided with the Trump administration by allowing it to keep a ban on refugees from entering the country. A lower court had ruled against the president and would have permitted the entrance of some 24,000 refugees by the end of October.