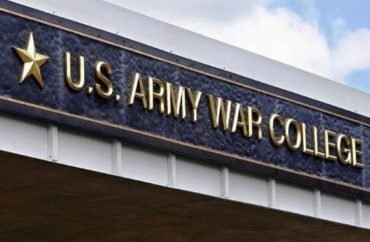 Leaders of the United States Army War College recently disinvited a scholar and critic of Islam from a speaking event at the Pennsylvania-based school that trains senior military officers and civilians.

A school spokesperson claims the event is postponed while officials look to find another expert who can counterbalance the talk planned by Raymond Ibrahim, but critics contend the school has essentially disinvited the scholar, a Coptic Christian from Egypt whose family has faced persecution.

The decision to shelve the talk was made after the Center on American Islamic Relations applied pressure to the college to disinvite Ibrahim, who was originally invited to give a lecture on June 19 on his latest book, Sword and Scimitar: Fourteen Centuries of War between Islam and the West.

CAIR, a controversial group in its own right, contacted the college’s Commandant Gen. John Kem and Provost James Breckenridge, urging them to cancel the event because “Raymond Ibrahim’s book … advance[s] a simplistic, inaccurate and often prejudicial view of the long history of Muslim-West relations which we find deeply troubling.”

CAIR also published a news release on June 6 stating that, if college officials invited Ibrahim, “it is also poised to exacerbate long-standing problems such as racism and human rights violations that exist within the US military.”

Meanwhile, a petition by Linda Sarsour’s MPower Change group on June 6 also called Ibrahim an “Islamophobe” and advocated for his disinvitation.

“Ibrahim’s rhetoric—characterizing Muslims as inherently angry, hostile, and prone to terrorism against ‘the West’—normalizes and justifies violence against Muslims, which is already a burgeoning problem for the military,” the petition stated.

In response, Ibrahim emphasized on his blog that “not once does CAIR highlight a certain passage or excerpt in its lengthy complaints to support its accusation that the book ‘is based on poor research.’”

And academics such as historian Victor Davis Hanson, Professor Paul Crawford, and Professor James Lindsay have praised Ibrahim’s new book and his research.

While calling Ibrahim extreme, CAIR is suspected of having terrorist links.

Ibrahim tells The College Fix that CAIR is “an aggressive Islamist organization which has repeatedly been linked to terrorist and subversive activities—so much so that the FBI has cut off all ties with it, and U.S. allies such as the U.A.E designate CAIR, by name, as a ‘terrorist organization’—right up there with ISIS, al-Qaeda, etc.”

The U.S. government does not accuse CAIR of being a terrorist organization; however, CAIR did have board members and staff accused of terrorism, has been an “unindicted co-conspirator and/or joint venturer” of Hamas, and repeatedly does not denounce the sponsors of Hamas and Hezbollah.

Nevertheless, on June 10, the war college decided to cancel Ibrahim’s event and claimed to “postpone” the event, according to a statement its officials gave to PennLive.

Army War College spokeswoman Carol Kerr wrote: “(The U.S. Army Heritage and Education Center) sponsors Perspectives in Military History: an evening public education program which draws a community audience that can include USAWC students. The presentation of Mr. Raymond Ibrahim’s book is postponed so USAHEC can pair Mr. Ibrahim’s military history insights in close proximity with another historical perspective, at a time when the USAWC curriculum has addressed historical analysis of influences on conflict.”

The National Association of Scholars notes that, despite claims of a postponement, it is “in effect” a rescission and an “indefinite postponement” of Ibrahim’s ability to host a lecture at the college.

NAS has since promoted an open letter addressed to President Donald Trump urging him “to use the ‘bully pulpit’… to restore Raymond Ibrahim’s lecture.” It is also calling for “the Department of Defense to set up new procedures to ensure that such pressures do not in the future prevent speakers from addressing audiences at military educational institutions.”

Glenn Ricketts, the public affairs director of the National Association of Scholars, told The College Fix in an email that, “For me, the disinvitation illustrates the depth to which political correctness and the outrage/grievance industry have saturated American educational and corporate institutions, with no apparent thought of the injustice done, the negative influence on the morale of the institution or, in this case, to the training of future defenders and military strategists. Good PR in the short term seems to me the paramount consideration.”

“NAS will be following this closely,” he added, “and we certainly hope that the Army War College will reconsider this monumentally bad decision. Perhaps it will recall that its mission is to train warriors, not social activists.”

When asked by The College Fix what disturbs Ibrahim about this disinvitation, he said, “If an ethnic Egyptian and native speaker of Arabic with verifiable credentials, whose extended relatives continue to be persecuted because they are Christian, can be characterized by Islamist groups with terror links as a ‘racist’ and ‘white nationalist;’ and if, of all places, the US Army War College … can so easily capitulate to such patently and deceptive tactics … then the ability to speak or hear about Islam, the cherished freedom of speech, has taken yet another blow.”

When contacted by The College Fix, a college spokesperson did not respond.