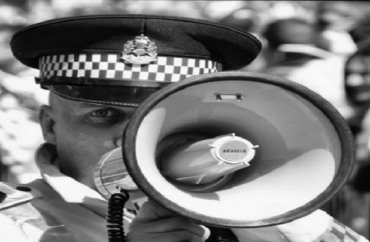 A University of Virginia police officer has resigned for “abuse of a PA system” after he shouted “Make America Great Again” at students on election night.

According to The Cavalier Daily, student protesters who intruded on a Board of Visitors meeting back on the 11th included a demand for the firing of three officers allegedly associated with the public address “abuse,” and wanted a “re-evaluation of […] tuition dollars going to the University Police Department.”

A university investigation found only one officer violated PA protocols.

“We believe any reasonable person would conclude that the inappropriate use of the PA system undermines the [University Police] Department’s goals and objectives and is detrimental to the department’s operation and the efficiency of the department,” a joint statement from Pat Hogan, University executive vice president and chief operating officer, and University Chief of Police Michael Gibson read.

Hogan and Gibson said the UPD is committed to high standards.

“We expect officers of the University of Virginia Police Department to exhibit empathy and concern for community members, treating all with due dignity and respect,” they said in the statement. “UPD remains committed to the highest professional standards in law enforcement and will work tirelessly to enhance the safety of our living and learning environment.”

Not so ironically, the protesters who demanded the firing(s) ended up shouting “No Trump, no KKK, no fascist U.Va.” as well as “F—k Donald Trump” upon their exit from the meeting.

Would the officer in question have been in hot water if, as a commenter to the article asks, he had shouted “Hope and Change” after the ’08 or ’12 elections?