The University of Virginia athletics department is facing controversy over the look of one of its new logos.

It seems the “V-sabre” design is insensitive to the university’s history of slavery as “the grip of the sabres […] mimics the design of the serpentine walls” found on campus.

According to The Cavalier Daily, those walls originally were built to hide working slaves and to “muffle the sounds of their daily life.”

UVA students and professors aren’t happy with the logo, claiming it “disregards history” and “uses it for promotional branding.”

Student Lauren Cochran said the walls “contribute to the historically non-inclusive environment” and are “a physical symbol of injustice.” She finds it “repugnant” that the V-sabre design got approved.

“I felt as if they were attempting to ‘glorify’ past University wrongdoings,” she said. “For many, this wall evokes stringent feelings of emotional distress and pain.”

Media Studies Professor Meredith Clark ripped the logo on Twitter, writing “Every single day, Black students, staff, faculty, and community members walk by those walls, the bricks with our enslaved ancestors’ fingerprints in them, and the statutes of Mr. Jefferson, and try to reconcile who we are with who (or what 🙄) he thought us to be.”

She said the design choice is one of “cultural incompetence.” 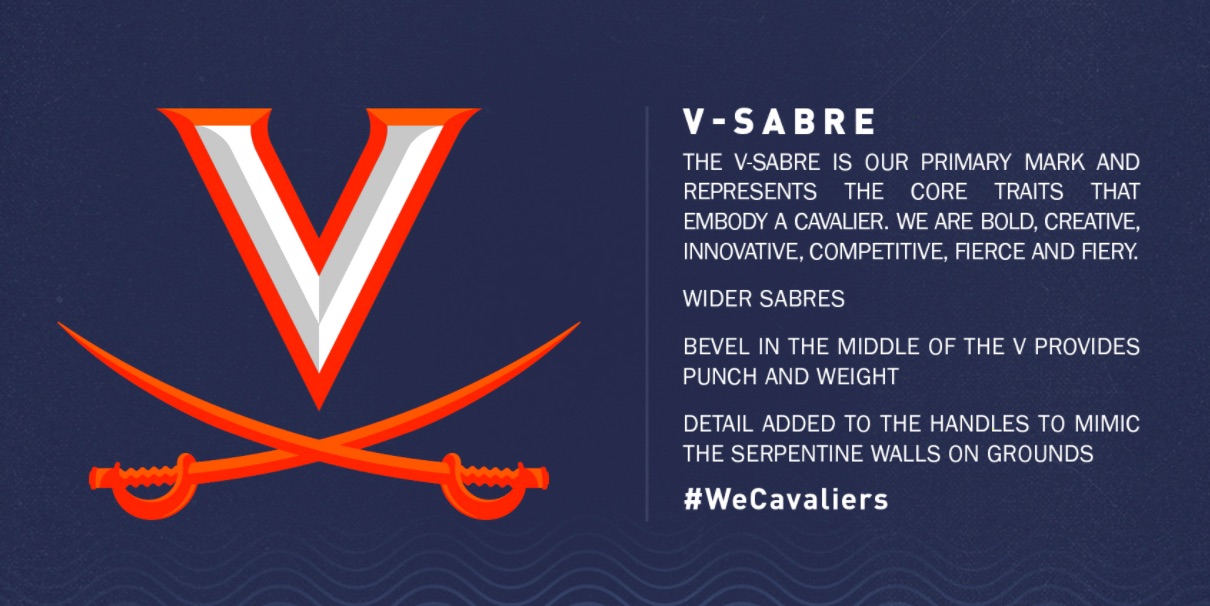 Virginia Athletics partnered with Nike in the creation of this new brand identity that they hoped would be “bolder and more powerful” than its predecessor while still “reflecting the unique characteristics and traditions of Virginia Athletics.” In addition to the new V-sabre mark, two new secondary marks were also revealed. The new brand identity was designed to be more visible when placed next to competing institutions.

However, Cochran believes that they got this wrong.

“There is nothing ‘strong’ about a wall that incites racist rhetoric,” Cochran said. …

Cochran believes that U.Va. Athletics should either create a new handle detail entirely or, if the serpentine wall detailing remains, there needs to be an official statement connected to the logo on all platforms that explains the history of the walls. She feels that only then can this be seen as an opportunity to rectify injustice and establish empathy.

Clark conceded many people “probably” don’t find the logo upsetting, and that she herself isn’t miffed enough about it to leave UVA. She just wants the school to “acknowledge [its] complex history.”

And it has: UVA constructed the Memorial to Enslaved Laborers which officially will be dedicated when the COVID-19 situation eases.

UPDATE: The Cavalier Daily sides with Clark and Cochran:

[T]he serpentine walls embedded into our athletic logo, they will begin to serve as a representation of the University community as a whole. Students frequently sport the logo to demonstrate pride in attending the University. As such, we must ask ourselves how the addition of imagery with a racist history affects marginalized communities on Grounds. It is imperative that the University acknowledge its ties to slavery and the oppression of the black population in this country — we cannot erase the racist pasts that brought our country to its present tense. Education about the realities of the history of slavery in our community is crucial to any hope for justice. Thus, the University must revoke its new logos and consult with the community it wishes to proudly represent before offering them an emblem that is meant to instill pride in students’ connection to U.Va.

UPDATE 2 on 6/16/20: The logo has been changed again — it will now feature smooth sabre handles because, well, current events. UVA athletics director Carla Williams said “There was no intent to cause harm, but we did, and for that I apologize to those who bear the pain of slavery in our history. As such, we have redesigned the logos to remove that [sabre] detail. All other aspects of the logos will remain the same.”